At CES 2019, Dell showed off a couple of new interesting products that grabbed a lot of attention but by far, the most ambitious new launch is the Alienware Area-51m flagship gaming laptop. It’s the first laptop to feature an upgradable desktop-level Intel CPU and Nvidia’s new RTX series graphics cards (GPU), which brings it one step closer to being an actual replacement for a gaming desktop. We had a chance to spend some time with it at Dell’s booth and here’s what we think of it.

If you take away the glowing alien logo on the lid, it’s not instantly recognisable as an Alienware laptop and that’s because the Area-51m is the first Alienware laptop to debut Dell’s new ‘Legend’ design language. According to the Dell, this is only the fourth time in the company’s history where the design for a product category has been completely overhauled from the ground-up. The sharp corners and bold lines has given way for more rounded edges and curvy accents.

The rear ‘loop’ backlighting is a prominent part of the new theme, as it’s also present on Dell’s upcoming 55-inch 4K OLED gaming monitor. Out of the two colours schemes, we personally quite like the white trim or as Dell calls it — Lunar Light. A nearly 4kg, the laptop is incredibly heavy and it’s not something you’ll be carrying around, even at home. It also ships with two power adapters, however, we’re told that a single one is enough for regular use while the second one is need if you plan to switch to the high-performance profile or if you’re overclocking the GPU or CPU. 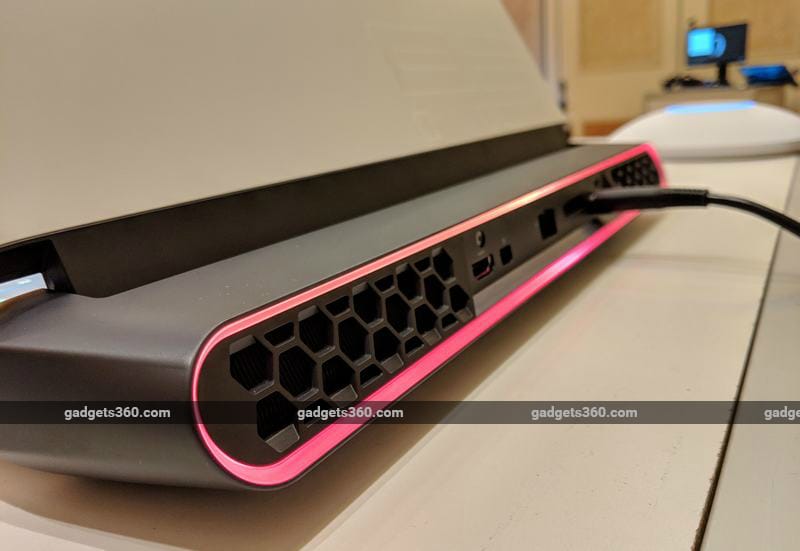 The Dell Alienware Area-51m feels very well built and the palm-rest area has plenty of room to comfortably rest your hands. The keys have good travel too and from the little time we spent with it, we found to be quite comfortable for regular typing. It’s nice to see Dell finally incorporate per-key RGB backlighting, instead of the traditional four-zone lighting that’s present on existing Alienware laptops.

You get a pretty good selection of USB connectors and display-out options too, however, we do feel an SD card reader should have been included. Granted, the focus of the Alienware Area-51m is purely gaming but most people would also be using it as a regular Windows PC every now and then and an SD card reader is something we take for granted in laptops, especially with something the size of this one. 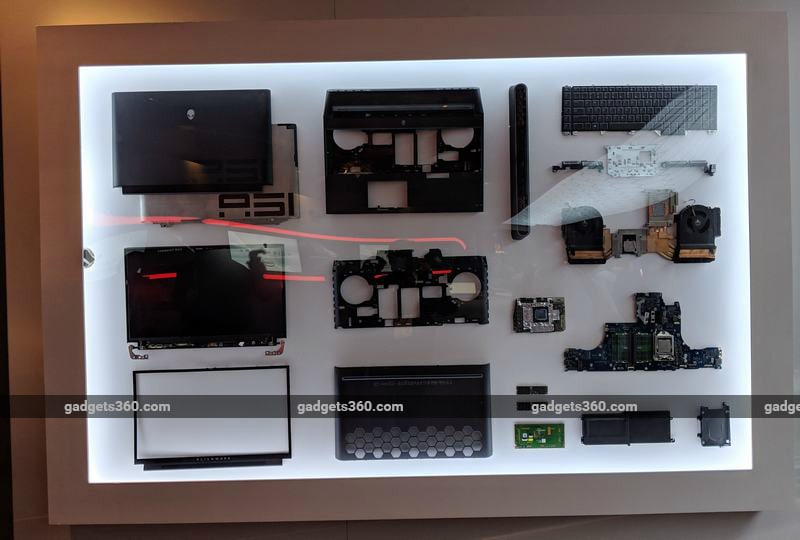 The main star of the show though is the upgradeable components. The Area-51m boasts of a desktop-level Intel Z390 chipset with means, it uses CPUs based the LGA 1151 like the recently launched 9th generation Core i9-9900K. For graphics, the laptop uses standard Nvidia GeForce RTX 20 series graphics cards and not the Max-Q editions. Dell says that it’s relatively easy to get to the components you wish to replace. Unfortunately, we couldn’t do a tear-down ourselves without alerting security so we’ll just have to wait to get our hands on a test unit and test the claim ourselves.

Since these are power hungry components, the Area-51m has plenty of vents all around, including some massive, hexagonal-shaped ones underneath the laptop. The ones setup in the demo area were running quite cool and silent but then again, this was in an air-conditioned space so the real challenge would be to see how it copes with our perpetually tropical climate in India, especially after overlooking it. Last but not least, the 17.3-inch IPS panel seems to have good brightness and we didn’t encounter many reflections, thanks to the matte finish. Tobii Eye Tracking is also present on some of the top-end models. 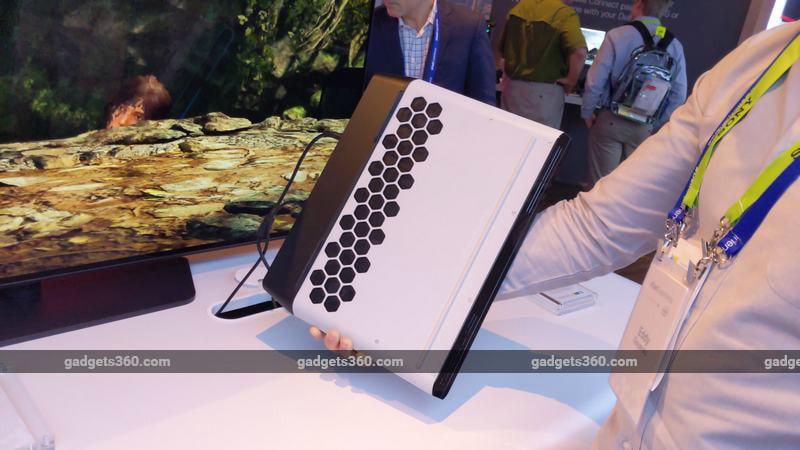 A truly upgradable laptop has been on every gamer wish-list for a long time and its great to finally see that dream being realised. The Alienware Area-51m could spark a new trend in gaming laptops in 2019 and we won’t be surprised if we see a similar, modular solutions from rival manufactures this year. However, we’re still a long way before something like this goes mainstream, mainly due to the lack of standardisation for a modular platform, from component manufacturers.

The Alienware Area-51m starts at $2,549 (roughly Rs. 1,77,000), which is quite expensive and the price tag will only get bigger by the time it lands in India, but considering that this is the only laptop currently which offers this level of upgradability gives it a unique advantage over the competition.

Disclosure: Dell sponsored the correspondent’s flights and hotel for the trip to CES, Las Vegas.