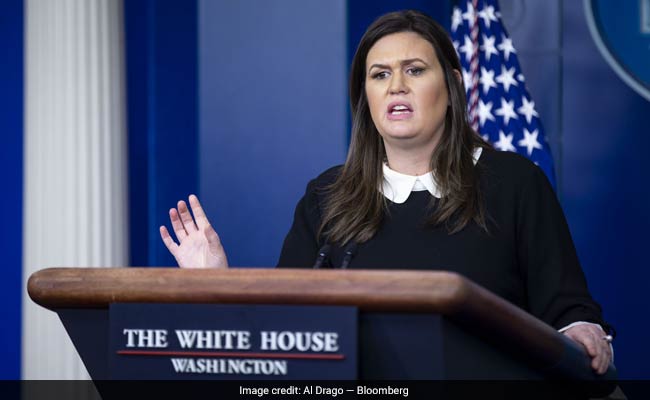 President Donald Trump said Tuesday that he directed White House press secretary Sarah Sanders “not to bother” with press briefings because he believes that reporters are rude to her and that most members of the media will not cover the administration fairly.

Press briefings, which used to be a near-daily occurrence, have become a rarity in the Trump White House. Sanders has not provided an on-camera briefing for more than a month, including the duration of the partial government shutdown.

“The reason Sarah Sanders does not go to the ‘podium’ much anymore is that the press covers her so rudely & inaccurately, in particular certain members of the press,” Trump said on Twitter. “I told her not to bother, the word gets out anyway! Most will never cover us fairly & hence, the term, Fake News!”

Olivier Knox, president of the White House Correspondents Association, said in a statement that the Trump administration’s move “sets a terrible precedent.”

“Being able to question the press secretary or other senior government officials publicly helps the news media tell Americans what their most powerful representatives are doing in their name,” Knox said in the statement. “While other avenues exist to obtain information, the robust, public back-and-forth we’ve come to expect in the James A. Brady briefing room helps highlight that no one in a healthy republic is above being questioned.”

Trump’s tweet came shortly after White House spokesman Hogan Gidley was asked about the subject during a live interview on Fox News.

Gidley said the briefings had not permanently ended.

“Sarah Sanders will absolutely be back at this podium talking to the press and delivering the message to the American people,” Gidley said.

“It’s kind of ridiculous. You can’t win for losing half the time,” he said.

She and other White House officials have spoken to reporters in more-informal gaggles on the White House driveway several times since then. Most often, those sessions occur after television interviews conducted from the White House grounds.