Hosts United Arab Emirates defended resolutely and eked out a 2-0 win over a dominant India at the Zayed Sports City Stadium.

Goals from Khalfan Mubarak and Ali Ahmed Mabkhout sealed the win for the home side, who were lucky to not concede tonight in a game that was dominated by the Blue Tigers.

The game started with the Indians looking to play on the front foot and their approach was rewarded when they got a corner. From that, Sandesh Jhingan’s header went over as he could not time it to perfection.

Soon after that, the away side recovered the ball brilliantly in the UAE half and Sunil Chhetri’s pass sent Ashique Kuruniyan away. His shot however, was saved by Eisa in the Emirati goal. India’s improvised corner routine found Jhingan again and again his header floated harmlessly wide of the goal. ​

Some great play from Ashique set Udanta flying on the right. The winger kept the ball in play well and found Anirudh Thapa, whose lovely cross found Chhetri. However, the Indian skipper’s header was saved well by Eisa.

As the Indians let up their intensity just a tad bit, a mistake in defence from Anas Edathodika saw Mabkhout get the ball. He passed it to Mubarak, who skipped past a couple of challenges before finishing past Gurpreet Singh Sandhu.

Right after that, Chhetri had another golden opportunity as a mistake in the UAE defence put him through on goal but his shot went just wide.

The second half saw Stephen Constantine bring on Jeje Lalpekhlua for Halicharan Narzary right from the get go as the Indians looked to continue with their aggressive play. From a deflected free-kick the ball fell to Jeje on the edge of the box and the Mizo sniper’s volley went just wide.

Two minutes later, a great one-two between Chhetri and Udanta saw the latter let rip but his shot deflected to safety off the underside of the crossbar. India had begun to tire as a result of their intense approach.

In the 74th minute, UAE went close to doubling their lead as Al Hammadi’s effort hit the post and the rebound was almost palmed in by Gurpreet as it eventually went wide.

As the Indians pushed for the equaliser, the home side killed the game off in the 88th minute as Salmin’s pass found Mabkhout in the box, who threw off Kotal’s attentions with a feint and slotted calmly into the goal.

India had another chance to score a goal as a free-kick from Rowllin Borges found Jhingan but his header crashed off the bar, leaving the Blue Tigers ruing their luck and poor finishing.

The result means UAE are now top of the group with four points from two matches. India are now in second position on three points, ahead of Thailand on goal difference. The Manipuri winger was at his best again, using his pace to get in behind the defence. He impressed with his direct running and came close to scoring when his shot hit the crossbar.

On a different day, Chhetri could have scored at least two goals. He was again very good in the box as he troubled defenders all night long and had two of India’s best chances. His finishing today was not at his brilliant best. 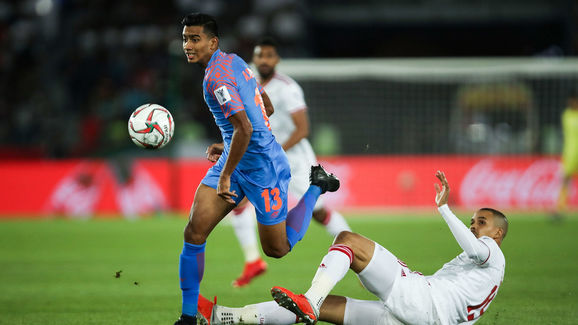 Another game where the youngster impressed with his running and ability to get in behind the defence. Not afraid of a physical battle, he also had one of India’s chances to score. Tired towards the end.

Another good performance from the midfield dynamo as he provided great support going forward and was always available to pick the ball up from defence. He set Chhetri up for one of his chances.

I'm ready for another Cuban Missile-style crisis: Putin to US