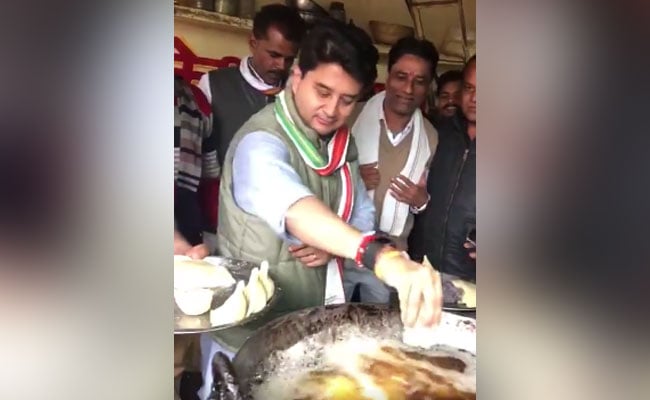 Congress leader Jyotiraditya Scindia’s subtle dig at the government amid a huge controversy over a yet-to-be-released report on jobs was to fry samosas at his constituency in Madhya Pradesh. “Frying Samosas today for those who do not like pakodas,” he posted with a video of his culinary escapades, referencing a comment of Prime Minister Narendra Modi that has often been criticized by the opposition.

Jyotiraditya Scindia was touring his constituency Guna when he stopped at a shop popular for snacks like samosas. Soon, he was standing next to a large pan of boiling oil, releasing samosas to be deep fried.

“I hope you all liked the samosas I made. Usually, samosas are best spicy, but if anyone thought they were too hot, apologies,” the lawmaker wrote cheekily in Hindi. The video he posted on his official twitter handle has been widely shared.

The Congress MP’s jibe added to the many that are floating around since a report of the National Sample Survey Office, which says unemployment was at a 45-year-high in 2017-18, was revealed by the Business Standard newspaper. Two members of the National Statistical Commission have quit because the government has not released the report despite it being cleared by the data body.

“The rate of unemployment in the country has increased. This is a result of Modi ji’s pakodanomics,” said Congress leader Kapil Sibal.

Last year, PM Modi had said in a TV interview that even selling pakodas at a roadside shop is a form of employment and should be seen as “job creation”. Critics have latched on to that comment to repeatedly criticize the government on the lack of jobs and unemployment.