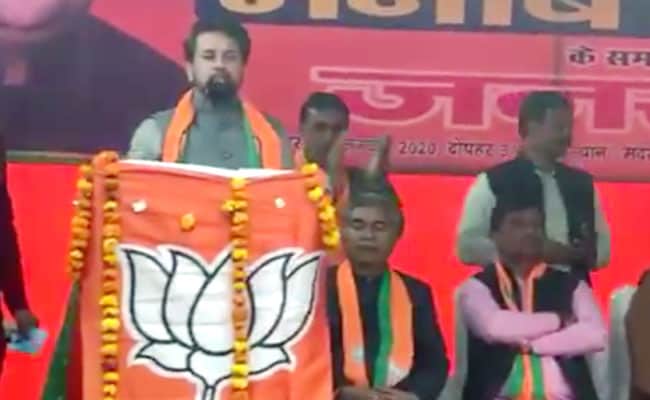 Union Minister Anurag Thakur and BJP leader Parvesh Sahib Singh should be removed from the party’s list of star campaigners for next month’s Delhi Assembly elections, the Election Commission ordered this afternoon. The poll body’s order comes after shocking comments by both leaders during election rallies this week, in which Mr Thakur urged a crowd to “goli maaro (gun down traitors)” and his colleague claimed those who have mounted a weeks-long peaceful sit-in protest at Shaheen Bagh against the controversial citizenship law “will enter your houses, rape your sisters and daughters”.

However, being removed from the BJP’s list of “star campaigners” does not mean Anurag Thakur and Parvesh Sahib Singh cannot campaign for the party. It only means expenditure incurred will be added to candidate’s expenditure that is capped at 28 lakhs; star campaigners are exempted from such limits.

“We will study the letter and respond… we are putting a balanced campaign and with facts,” Union Minister and senior BJP leader Prakash Javadekar said in response to the order.

On Monday Anurag Thakur, a Minister of State, was caught on camera at an election rally in the northwest of Delhi chanting the first half of a slogan that concludes with a call to gun down traitors.

The following day Parvesh Sahib Singh, the BJP’s West Delhi MP, said: “Lakhs of people gather there (Shaheen Bagh). They will enter your houses, rape your sisters and daughters, kill them. There’s time today… Modi-ji and Amit Shah won’t come to save you tomorrow”. 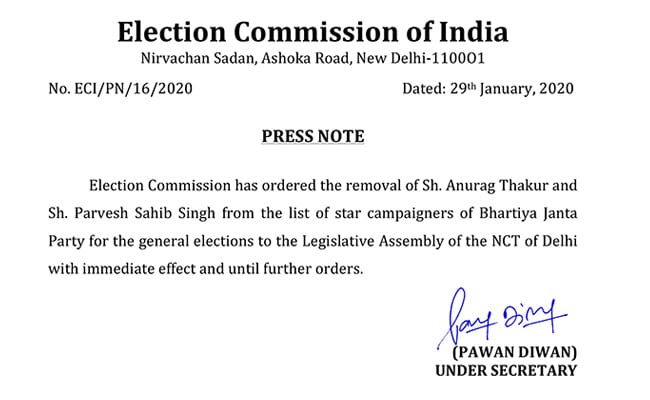 In a widely-shared video, Anurag Thakur, who was campaigning for Manish Chaudhary, can be seen and heard chanting “desh ke gaddaron ko“, to which the crowd enthusiastically replied “goli maaro sa***n ko“; the entire chant translates to “shoot down the traitors who betray the country”.

Taking cognisance yesterday the poll body served Mr Thakur a show-cause notice over attempts to promote enmity or hatred between different classes of citizens on the grounds of religion, race, caste, community or language.

A defiant Anurag Thakur, who has till 12 pm on Thursday to reply to the poll body’s notice, told reporters who asked him to identify the “traitors” that: “First you should watch the entire video… Then you should see the mood of the people of Delhi.”

The second shocking statement – Mr Singh’s comment – appeared to echo a line of attack by the BJP that targets the Shaheen Bagh protesters.

For more than a month, over 200 women have been joined by hundreds every day at Shaheen Bagh at a sit-in protest against the Constitutional Amendment Act, or CAA, which promises citizenship to only non-Muslim refugees from three neighbouring countries.

On Monday sources said that the BJP, faced with fierce and unrelenting protests on the issue, had decided to make the most of the difficult situation and hinge its Delhi election campaign on the Shaheen Bagh protest.

Besides making religion a test of citizenship for the first time in violation of the constitution, the CAA along with the planned National Register of Citizens (NRC) can be used to target Muslims who are unable to prove their lineage, critics say.

The government, however, says the law is necessary to help those who have faced religious persecution and will not endanger the citizenship of any Indian.

Delhi votes for a new 70-member Assembly on February 8 with results due three days later. The ruling Aam Aadmi Party (AAP), which won 67 of 70 seats in 2015 polls, is bidding for a second straight term, but is tipped to face fierce fight from the BJP, which won the remaining three seats last time out.