​​Borussia Dortmund face a tricky trip to fifth-placed Eintracht Frankfurt in the Bundesliga on Saturday, looking to consolidate their six-point lead over Bayern Munich at the division’s summit.

Lucien Favre’s side have won their last three in the league heading into Saturday’s encounter, while Eintracht are eager to improve on last season’s eighth place finish.

The past six seasons have seen ​Bayern crowned champions, and Dortmund know that a victory on Saturday could prove pivotal if they are to claim their first domestic title since 2012.

​Favre’s side have no new injuries to contend with following their impressive 5-1 win over Hannover 96 last Saturday, however they still remain light in central defence. With the trio of Leonardo Balerdi, Dan-Axel Zagadou and more importantly Manuel Akanji all missing, Favre was forced to play natural midfielder Julian Weigl at centre half in their most recent outing. With the three centre-backs still unlikely to feature, he could opt for the pairing of Weigl and Abdou Diallo once more.

The hosts face similar issues in defence, with David Abraham, Lucas Torro and Timothy Chandler all doubts, while the latter could be fit in time for the clash.

The reverse meeting between to the two sides this season saw the Black and Yellows​ run out 3-1 winners at the Westfallenstadion, with Paco Alcacer scoring on his debut after signing permanently from Barcelona. The last time Eintracht secured a win over ​Dortmund was back in the 2016/17 season, where they claimed six points over the current league leaders thanks to 1-0 and 2-1 wins respectively. In the 94 meetings between the sides overall, Favre’s side hold the advantage with 47 wins as opposed to Eintracht’s 30.

Dortmund have been in fine form this campaign, losing just once the entire season​, as they came up short in a 2-1 defeat to Fortuna Dusseldorf. Since that slip up, they’ve won their last three in the league, scoring a league-high 50 goals in the process.

Both Alcacer and ​Marco Reus are on 12 goals for the season, only one behind their opponent on Saturday, Luka Jovic.

Serbian Jovic has been in inspired form for Die Alder this season, alongside strike partner Sebastien Haller, with the pair having a hand in 35 goals for Adi Hutter’s side.

Their form has definitely helped the club this term, although a recent run of just two wins in their last five league outings has seen them wobble somewhat.

Top-scorers in the Bundesliga this season:

Here’s how each side has fared in their last five fixtures:

To maintain their healthy six-point lead over Bayern, Saturday’s clash becomes a vital component in the club’s search for domestic silverware this season. Eintracht are certainly no walk-over, boasting two of the ​Bundesliga​’s top scorers amongst their ranks, while Dortmund head into the fixture with three centre halves out injured. 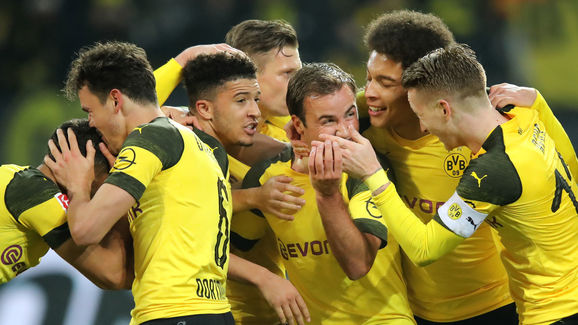 If they are to claim the title this term, they will certainly need to be winning these kinds of matches in order to do so.

Christian Pulisic Set for Up to 4 Weeks Out After Injury...