​Nuno Espirito Santo has hailed his Wolves side for an impressive away win at Goodison Park that puts them five points clear of ninth-place Everton.

Wolves were helped out by some poor defending from the hosts who left plenty of space to exploit and were quick into clumsy challenges. Leighton Baines was the first man at fault bringing down Matt Doherty in the box just five minutes in, conceding the penalty that led to Wolves’ opener.

Andre Gomes pulled one back for Everton before Micheal Keane handed ​Wolves another lifeline needlessly bringing his man down as the ball was heading out of play. Joao Moutinho delivered the set piece wonderfully which Raul Jimenez latched on to to restore the lead.

Marco Silva slammed his side for their defending of the set piece, with 5’8 Seamus Coleman the closest man to the imposing forward. Santo wasn’t too concerned with the opposition though and instead expressed pride in his side for taking their chances well.

“We are proud of the work we did. Everton are a very good team, good manager,” he told BBC Sport. “It’s tough to come here with [the] atmosphere.” Santo admitted Everton tested them more in the second half before Leander Dendoncker reacted quickly to a loose ball in the area to offer his side a reprieve in a tight affair.

“We were better in the first half and in the second half both teams were organised,” he added. “It requires a lot of shape and being compact but when we achieved the third goal the game was done for us.”

Wolves have opened up some space on the chasing pack with that result and currently sit in pole position for a potential European spot. Santo insisted he is not looking at the table though and his side will continue to take it one game at a time. 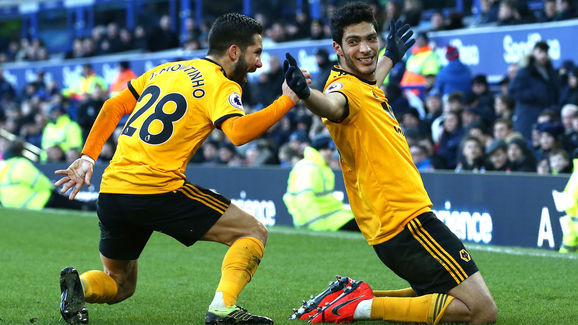 “There is a long way to go – we are not looking at the table – we will go game by game, this is the approach we have.”