​Everton boss Marco Silva has hit out at the club’s former manager Sam Allardyce, after the veteran coach previously suggested the team’s attractive new style of football would ultimately be their downfall.

The Toffees have struggled to find consistency under Silva this season, with their performances ranging from one extreme of quality to the other. With the Premier League campaign now past the midway point, the side’s inconsistencies have seen them slip to 11th in the table, having picked up a modest 27 points from 21 matches. 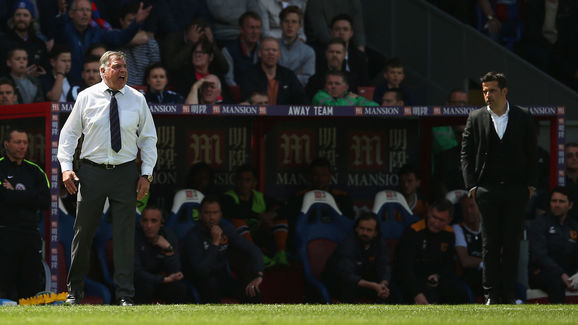 Addressing Allardyce’s criticisms, via the Mirror, Silva came back fighting with some barbs of his own, stating: “We need to look if these people love this club. If some people have another agenda, don’t want good results, just instability within our club, they are not worth listening to,” he said of Allardyce.”

“OK he (Allardyce) is one colleague, one coach as well. Maybe if it is David Moyes I would listen because he did something really important at this club. But in this case it is not important at all. We have to look for what is important for us as a club. This club needs stability, our players need some stability, confidence, our fans need that too.” Silva’s side ended a dismal run of one win in eight matches last weekend, when they edged past League 2 leaders Lincoln City in a ​2-1 FA Cup win at Goodison Park. While the victory wasn’t the most convincing, Silva will hope it will act as a catalyst to boost his side, ahead of what looks set to be a fiercely fought contest for Europa League qualification.

In other news, the spokesperson of former ​Everton star Wayne Rooney has ​released a statement regarding the player’s arrest for public intoxication in the USA last month. It was claimed that Rooney’s behaviour was promoted by the joint consumption of prescribed sleeping pills with alcohol, an error which saw the D.C. United ace fined over $100.

Liverpool Chairman Tom Werner Hoping That There Is More Competition For...

Dabangg 3: Ahead of trailer launch, everything we know about the...

The 9 Monster Matches We're Most Looking Forward to Next Season