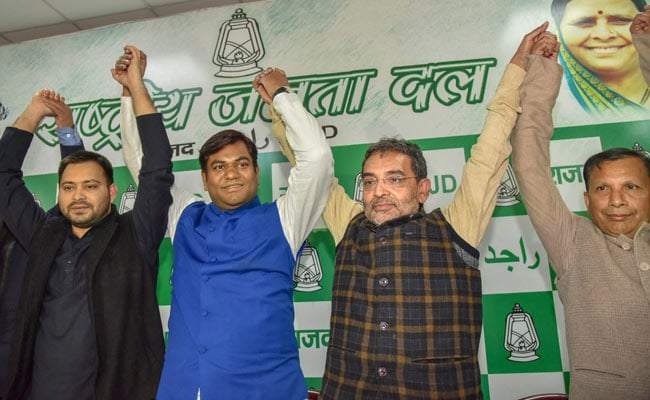 The Mahagathbandhan in Bihar is ready to begin discussions on sharing the 40 Lok Sabha seats in the state. Key leaders of all the parties are expected to meet on Monday over a lunch of fish curry and rice. Their host Mukesh Nishad, who coined the slogan “Maach bhaat khayenge aur mahagathabandhan ko jeetayenge” (meaning “we will eat fish and rice and ensure the Mahagathbandhan wins”) has ordered approximately 200 kg of fish for the 600 guests.

The NDA has finalised its seat sharing plans after much tumult and a walkout by Upendra Kushwaha, though no formal announcement have been made. Chief Minister Nitish Kumar’s party and the BJP are going to have equal share of 17 seats each. Ram Vilas Paswan’s Lok Janashakti Party will get six seats.

The division for the Mahagathbandhan may not be so simple. The six-party conglomerate is expanding and everyone, beginning with Upendra Kushwaha and Jitan Ram Manjhi, will expect a bigger seat share.

The largest number of seats is expected to go to Lalu Yadav’s Rashtriya Janata Dal, which won 80 of the state’s 243 seats in the assembly elections held in 2015, just a year after its disastrous showing in the 2014 national elections.

The party had won only 4 seats, but surged back to power in the state the next year with Nitish Kumar’s party, which won 2 seats and the Congress, which won one. Nitish Kumar, though ended the alliance last year and formed government in partnership with the BJP.

Mr Kushwaha had left the NDA after it became clear that he would be offered two seats, one less than what he won in the 2014 elections. Jitan Ram Manjhi had walked out of Mr Kumar’s Janata Dal United after a spat in 2015.

Mr Nishad, who also was with the BJP for the 2014 elections and even held joint rallies with BJP chief Amit Shah, quit the NDA last year.