Tuesday November 19, 2019 is a date that Tottenham fans are unlikely to forget any time soon.

Not only did Mauricio Pochettino unceremoniously get the boot from the Tottenham Hotspur Stadium, his replacement was already lined up – in the form of former Chelsea and Manchester United boss Jose Mourinho.

Yes, less than 12 hours after announcing Poch was gone, Jose was confirmed as the club’s new head coach – with the footballing world now left to salivate while they ponder how he might get on in north London.

Yes, we’ve set the scene, got Jose in place and are ready to show you how things might pan out for the ‘Special One’…

First things first, Tottenham needed to get rid of Poch – sad, but unfortunately necessary for us to carry out our business here.

So with Spurs laying 7th (that’s an improvement on reality), Daniel Levy pulls the trigger and got rid of Pochettino – immediately installing everybody’s favourite Portuguese boss. 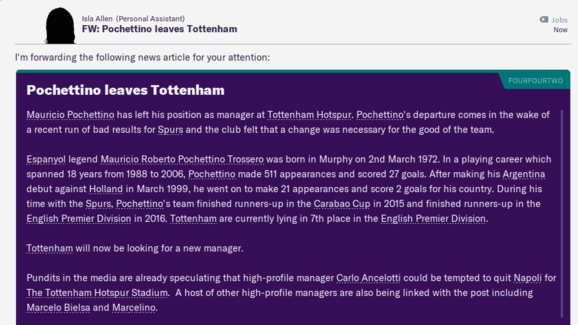 Not a terrible position for Jose to inherit by any means, Spurs only seven points off top spot and more importantly ahead of ​Arsenal on goal difference.

The catalyst for Poch’s departure was, naturally, only winning three out of Tottenham’s last eight games – coincidentally, the nail in his coffin coming away at West Ham – who Jose will face in his first game in charge this weekend… So, what could Mourinho conjure up in his first month?

Well, truth be told not a great deal – but a solid enough start to life in his new surroundings, ended up with Spurs rising up to 6th, despite losing to Arsenal in the north London derby.

Oh, and that pesky out-of-contract bunch – Monsieur’s Eriksen, Alderweireld, Vertonghen – have thus far failed to agree to anything… 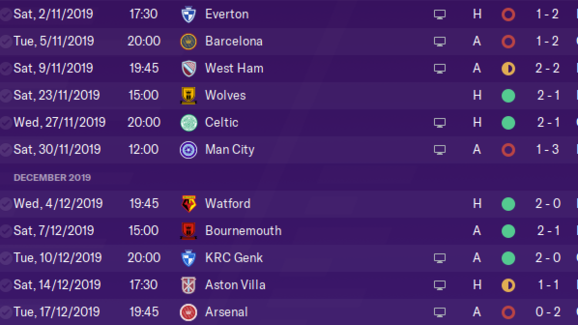 Jose has only ever taken charge of a side mid-season once in his career – at Porto back in 2002 – so this is new territory for him.

That may explain why getting across his ideas may have been taking slightly longer than he hoped – with the table in February showing that actually, things haven’t improved. Arsenal, meanwhile, are having a purple patch under beleaguered boss Unai Emery and are now third.

Oh, and Spurs haven’t sign anybody in the January transfer window. They did, however, lose the services of Christian Eriksen – albeit to PSG at the end of the season, for FREE… Fast forward time to May 2020 and things aren’t going too well. Dumped out of the Champions League by Napoli, Mourinho then oversees four defeats in a row – confining Spurs to a 6th place finish, as well as losing in yet another FA Cup semi-final.

To make matters worse, Arsenal cream the Lilywhites at the Emirates Stadium and easily finish third – 16 points ahead of Mou and the boys.

Furthermore, Mourinho’s position is suddenly under threat – with rumours at the end of the season that he may depart… Having clung on to his job by his fingernails, Mourinho needs to strengthen Tottenham in the summer.

We’ve heard from Poch all along that Spurs need a reboot, but the ‘Special One’ isn’t so sure it seems. He does, however, solve the problem right-back area with two major signings – Max Aarons for bucket loads of money and Achraf Hakimi on loan – snaps up Giovani Lo Celso on a permanent basis and………yes, you got it, brings back ​Gareth Bale, on loan, on deadline day!

Elsewhere, there are some major, major moves – an indication of what’s to come in the summer of 2020? Wouldn’t you know it, ​Spurs get off to a cracking start – perhaps Jose has worked out the team to lead him to glory.

Five played, four wins, one draw – and joint top of the Premier League. Pressure? What pressure? Just Over a Year in

Mourinho has now been in charge for 13 months, and things really are looking rosey.

Engrossed in a highly competitive title race, doing well in the Europa League and no longer pressure, Jose is dreaming of his customary trophy in his first full season in charge.

Can he keep up the momentum? The start of February rolls around, and although Tottenham have slipped to fourth in the table, it’s still an exceptionally close title race.

Six points separates the top four, and Mourinho makes one huge signing on deadline day to shore up things in midfield – bringing in Ruben Neves from Wolves for £60m. It All Goes Wrong

Turns out getting rid of Poch probably wasn’t a good idea, after all. Because, as you’re about to see, the season is all over – and Spurs have contrived to not only fall out of the title race, but fall out of the top four picture altogether.

Not only that, they are humiliated by Rosenborg in the Europa League quarter finals and are eliminated, on penalties, by Huddersfield in the FA Cup quarter final.

An incredible collapse that sees just Tottenham win just four of their final 15 games of the season, drawing six and losing five. Daniel Levy gave Poch five and a half years at the club, before turfing him out of the door – but for Mourinho, the dream Tottenham chapter is brought to an end significantly earlier than that. The managerial merry-go round that follows?

Ha, you couldn’t even begin to write it…. It could be a fun and bumpy ride everybody!