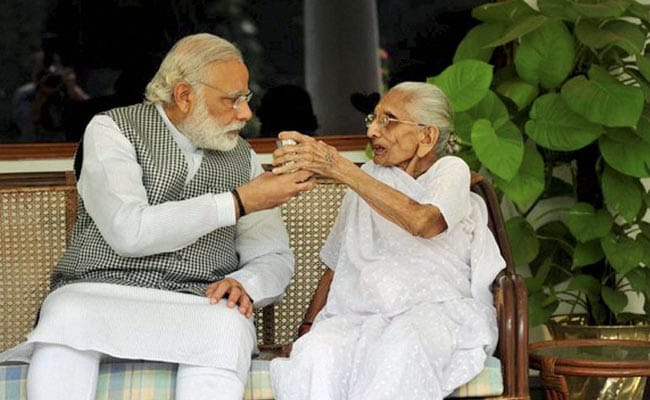 “A lot of people ask me how my mother felt when I became PM, but by then the name ‘Modi’ was in the air, my photos were being printed and there was a lot of excitement all over. But I think the bigger milestone for her, was when I became CM,” PM Modi said in a five-part interview to popular social media page Humans of Bombay.

PM Modi said he was living in Delhi when he found out that he is going to get the top job in Gujarat. Before the swearing-in ceremony, he went to meet his mother in Ahmedabad, where she lives with his brother.

Celebrations were on when PM Modi reached Ahmedabad, he said. Heeraben Modi had already found out that her son was going to be the chief minister of her state.

“But my mother just looked at me, hugged me and said, ‘The best thing is that you will be back in Gujarat now!’ — such is a mother’s nature, that no matter what’s going on around her, she wants to be close to her children,” PM Modi said in the fourth part of the interview.

PM Modi’s mother then gave him that one mantra that he says, has stayed with him.

“…she said, ‘Dekh bhai, I don’t understand what you do, but promise me you will never take a bribe — don’t ever commit that sin.’ Those words really impacted me and I’ll tell you why. A woman who has lived in poverty her entire life and who has never had material comforts, during an abundant and celebratory time, asked me to not take a bribe,” the Prime Minister said.

He said his roots remain strong even after he has become the Prime Minister. “Back in the day, even if someone told my mother that I got an ordinary job somewhere, she would have distributed mithai to the entire village. So CM-VM nothing matters to her — as long as the human in the Chair strives to be honest and absolute for the country,” PM Modi said.

Narendra Modi was Gujarat chief minister for 13 years until he took over as Prime Minister in 2014. PM Modi usually meets his 90-plus mother when he visits Gujarat, especially on his birthday and other big days.

In the previous instalments of the interview, PM Modi had spoken about his childhood – how he grew up as the son of a tea-seller, his early inclination towards the BJP’s ideological mentor RSS or Rashtriya Swayamsevak Sangh, his two-year-long visit to the Himalayas and how he learnt to speak Hindi.