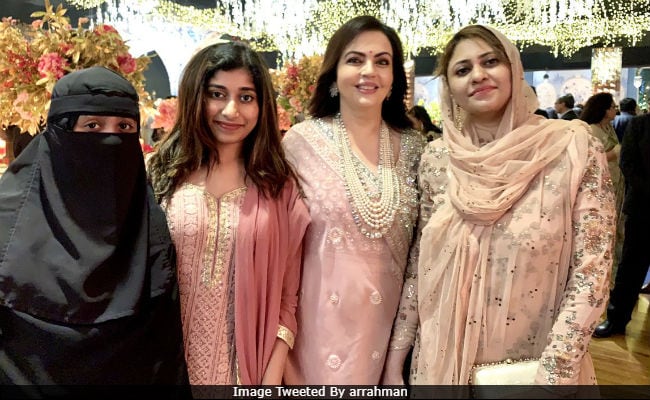 After Oscar-winning music composer AR Rahman was criticised for allegedly ‘forcing’ his daughter Khatija to wear a niqaab at an event, he shared a post on Twitter, which appears to be his response to the trolls. AR Rahman shared a picture of his wife Sairaa Banu and daughters Khatija and Raheema with Nita Ambani and wrote, “The precious ladies of my family with Nita Ambani ji,” and added that hashtag ‘Freedom To Choose.’ In the picture, Ms Banu has covered her head with a dupatta, Khatija wore a niqaab but Raheema did not. Here’s what AR Rahman tweeted some hours ago.

At the event in Mumbai to celebrate 10 years of Slumdog Millionaire earlier this week, Khatija was invited on to the stage to speak about her father and his achievements.

In a lengthy Facebook post shared on an unverified account purporting to be Khatija’s, she said that contrary to the claims made by trolls that her father has “double standards,” wearing a niqaab was “her personal choice” and “the choices she makes in her life do not have anything to do with her parents.”

An excerpt from the post read: “The recent conversation of myself on stage with my dad has been doing the rounds, although I didn’t expect such an overwhelming response. However, there were certain comments which said that this attire is being forced by my dad and that he has double standards. I would like to say that the attire I wear or the choices I make in my life does not have anything to do with my parents. The veil has been my personal choice with complete acceptance and honour.”

The statement appears to be initially shared on her private Instagram account and re-posted by a user.

“I’m a sane mature adult who knows to make my choices in life. Any human being has a choice to wear or do what he/she wants and that’s what I’ve been doing. Hence, kindly don’t make your own judgements without understanding the exact situation #FreedomOfChoice,” read the concluding part of the post.

Professionally, AR Rahman has won six National awards, two Oscars, two Grammys. He has composed several hit songs. As of now, he is judging The Voice.