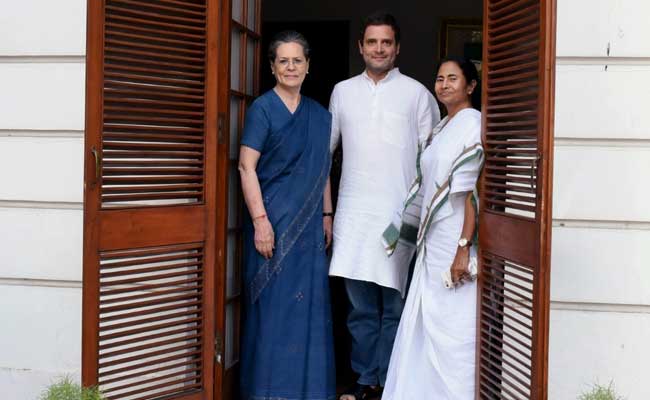 West Bengal Chief Minister Mamata Banerjee, who has so far kept the Congress at arm’s length, focusing instead on the role of regional powers, today signalled the possibility of closer cooperation at the national level.

Opposition parties have rallied around Ms Banerjee for her huge face-off with the centre, triggered yesterday by the visit of the Central Bureau of Investigation to the house of the Kolkata police chief Rajeev Kumar.

Most leaders have tweeted their support for her. Today, Tejashwi Yadav, the son of Bihar leader Lalu Yadav, and Kanimozhi of Tamil Nadu’s opposition DMK, visited her in Kolkata, where she has been on indefinite dharna since yesterday.

Welcoming the two young leaders, Ms Banerjee said, “It is our duty to work together… And work with the Congress at the national level”.

Ms Banerjee had been one of the key interlocutors of the opposition and amped her efforts last month with a mega rally of 23 opposition parties in Kolkata – a move she says is at the bottom of current row, due to the BJP’s “political vendetta”.

The patchwork alliance, however, has been hobbled by ideological differences and local-level enmity, seen between the Left and Trinamool, and Arvind Kejriwal’s Aam Aadmi Party and the Congress in Delhi.

The other case in point is Congress and the Trinamool Congress in Bengal. While Ms Banerjee shares a warm rapport with Sonia Gandhi, her relation with Rahul Gandhi has been marked by a certain chill. And at the local level, leaders of the two parties have been at loggerheads, which even the current crisis has not been able to smooth over.

At the central level though, the change has been rapid. Yesterday, Rahul Gandhi had reached out to Ms Banerjee.

I spoke with Mamata Di tonight and told her we stand shoulder to shoulder with her.

The happenings in Bengal are a part of the unrelenting attack on India’s institutions by Mr Modi & the BJP.

The entire opposition will stand together & defeat these fascist forces.

There are indications that central leaders of the party are also on the same page. In parliament, Congress leader Mallikarjun Kharge led the opposition charge, alleging that the central government was “using the CBI to finish the Opposition”.