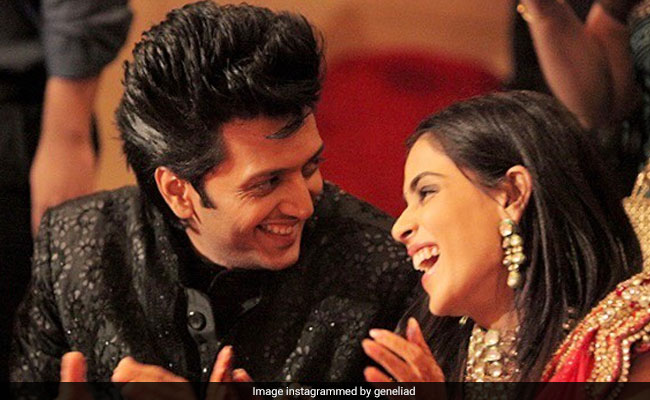 Happy wedding anniversary, Genelia D’Souza and Riteish Deshmukh. On their seventh wedding anniversary, actress Genelia D’Souza wrote a heartfelt note for her husband on Instagram. Genelia shared a throwback photo of herself with Riteish which appears to be from their wedding and accompanied it with a note in which she wrote that he is the “most amazing partner” and her “bestest friend”, who has always been with her through thick and thin. “Every girl has a certain perception of how they would want their life partner to be… I Honestly Didn’t.. I had this most amazing partner who was my bestest friend, who was the shoulder, I always found when I needed to cry and who made me believe that no matter how tough life is, with us being partners we would take it on in any form, in any way,” read an excerpt from Genelia’s post for Riteish.

In the note she further added: “So, I’m glad I never ever had a perception because the reality of living and breathing this wonderful man is all I ever needed to know.. I Love you. Ritesh Deshmukh..Here’s to many more laughs together, to the zillion times we will wipe each other’s tears and pick each other up when either/or feels weak or simply to life together forever and ever… Happy Anniversary.”

The photo shared by Genelia has 162,048 likes so far. The photot has been liked by Ekta Kapoor, Samantha Ruth Prabhu, Sanjay Kapoor and Sania Mirza. Kanchi Kaul, who is a close friend of Genelia wrote: “Happy anniversary, to you two beautiful souls. You both have that special kind of love which very, very, very few people manage to witness in a lifetime. May it stay as perfect as it as, always.”

Genelia D’Souza and Riteish Deshmukh first met on the sets of the 2003 film Tujhe Meri Kasam. After dating for over eight years, the couple got married in 2012 and they are parents to sons – Riaan and Rahyl. Genelia and Riteish have co-starred in Bollywood films such as Masti and Tere Naal Love Ho Gaya. They also worked together in the 2014 Marathi blockbuster Lai Bhaari.