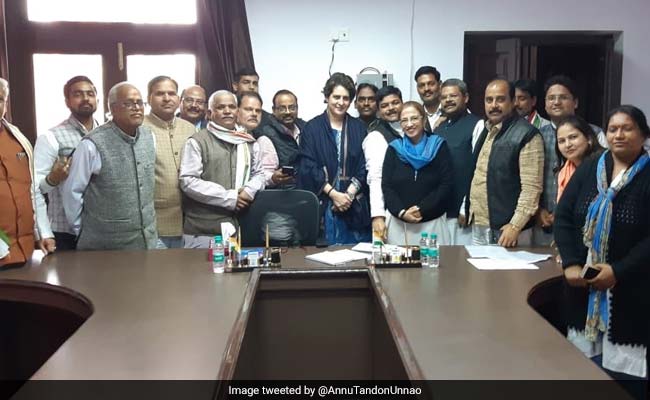 Priyanka Gandhi Vadra emerged after 5.30 am on Wednesday morning from an overnight meeting with Congress workers on the campaign for the national election due by May. “I am getting their views on how to fight these elections to win,” the party’s new general secretary told reporters after the 16-hour meeting.

Priyanka Gandhi Vadra met with district presidents and workers from eight Lok Sabha constituencies including the Gandhi family seats Amethi and Raebareli. The marathon meeting began on Tuesday afternoon after the 47-year-old arrived in Lucknow from Jaipur, where her husband Robert Vadra and his mother Maureen Vadra were questioned by the Enforcement Directorate on a money-laundering case.

“I’m learning a lot about the organisation, how it is structured and the changes that need to be made,” she told reporters.

How was the experience — her first since her brother and Congress president Rahul Gandhi announced her political debut — Priyanka Gandhi was inevitably asked. “It feels very good…They waited so long.  I am learning a lot,” said the mother-of-two, who had over the past 15 years limited herself to campaigning in the Amethi and Raebareli constituencies of her older brother and mother Sonia Gandhi.

The other constituencies that featured in the discussions were Lucknow, Unnao, Mohanlalganj, Sultanpur, Pratapgarh and Fatehpur.

Politically vital Uttar Pradesh has the most number of parliamentary seats – 80 – and any party that performs well in this state has a chance at power at the centre.

Rahul Gandhi has placed 41 of those seats, covering eastern Uttar Pradesh, under his sister’s charge. Jyotiraditya Scindia will be in charge of 39, a party statement said on Tuesday.

She is spending four nights in Lucknow, which, say Congress’s UP leaders, is unusual and “historic” for any Congress leader in recent times.

Priyanka Gandhi and Jyotiraditya Scindia, along with Rahul Gandhi, had held a grand roadshow on Monday to galvanise party workers in the state that gave the Congress its most iconic leaders and prime ministers but has over the past three decades preferred other parties like the BJP, Samajwadi Party and BSP.