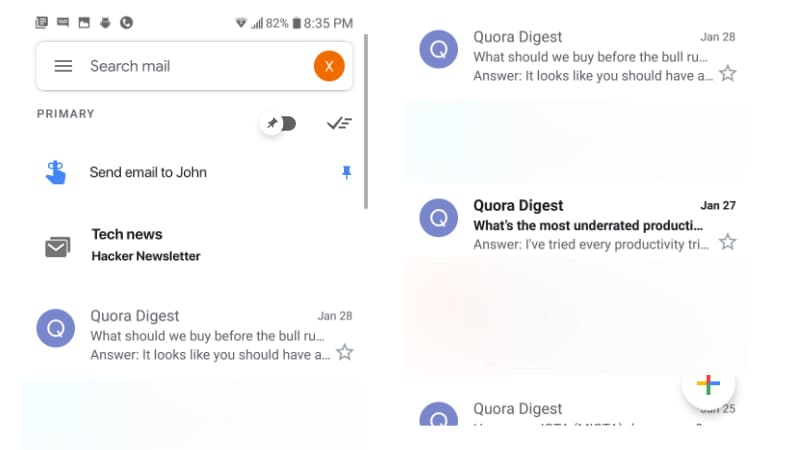 Google’s Inbox app will formally shut down next month. The company had announced its plans to shut down the email app last year, letting users switch to the Gmail app until the app is taken offline. Google is now reportedly testing a few Inbox features right inside the Gmail for Android app. It appears that Google may bring features such as bundles and reminders to future iterations of Gmail for Android.

A Redditor shared a screenshot of what looks like an internal build of Gmail for Android with a few Inbox features. The screenshot clearly shows the bundles feature that clubs similar emails together.

It has been a popular feature within Inbox and could prove to be useful if it ends up in future Gmail releases. Last year in September, Google announced its plans to kill the Inbox app, and said that it would bring the bundles feature to Gmail.

The screenshot also suggests the possibility of a reminders feature within Gmail for Android. Users may be able to quickly create and schedule reminders right inside Gmail for Android. However, since this seems like an early preview build, it’s still too early to speculate if these features will make it to the final build anytime soon.

According to the Redditor, the screenshot represents a very early design iteration. So far Google hasn’t revealed exactly which Inbox features will make it to Gmail’s mobile apps.

However, a lot of Inbox features have been seen in Gmail over the last year, including Smart Reply, Nudges, inline attachments, and more. Last week, Gmail’s mobile app started receiving Material Theme redesign.