​New Chelsea signing Gonzalo Higuain has offered his support to Maurizio Sarri as the Italian finds himself at risk of being sacked after just seven months in the job.

A recent run of two wins in six games has seen Chelsea slip out of the top four, putting them in danger of missing out on Champions League football for the second consecutive year.

The Blues lost their last two away matches by a 10-0 aggregate margin, thrashed 4-0 at Bournemouth before suffering a 6-0 defeat to Manchester City, which was their heaviest loss in any competition since 1991. 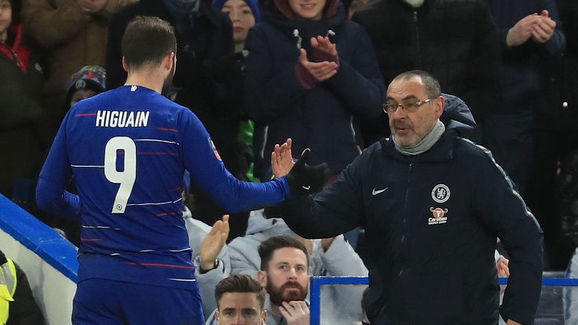 ​Higuain, signed on loan from ​Juventus in January, played under Sarri at Napoli, and he praised the 60-year-old for helping him to settle in quickly at Stamford Bridge.

“I’m just happy to be working with Maurizio again at a big club like ​Chelsea which has so much history and wonderful team-mates,” said Higuain, quoted by ​the Mirror.

“He helped me with his methods, but especially with his words.

“Before I came to Chelsea, I had the impression of a very good team, a great club, and of course you can see this is a very talented group of players. “It’s a huge challenge to come and play in the Premier League and I’m going to give my all to help Chelsea.”

Chelsea face a big month ahead and Sarri’s future may depend on Higuain, arguably one of the few players who remains loyal to him.

Chelsea players apparently “baffled by Sarri tactics”. Really ? They went 18 games unbeaten using them in the autumn. Is it him or them ?

The Blues face Malmo twice in the Europa League, Manchester United in the FA Cup and Manchester City in the EFL Cup final before returning to Premier League action against Tottenham on 27 February.