Google Chrome is all set to start giving you warnings for lookalike URLs. The new move will help you easily distinguish between fake and original websites and put a stop to all the malicious webmasters who use slightly misspelled domains of popular portals to get massive hits or participate in phishing campaigns. The feature is initially in a testing phase and is available since the release of Chrome Canary 70 since last October. However, users on the latest stable version of Chrome can also see its presence through the “Navigation suggestions for lookalike URLs” flag.

As the name of the flag suggests, Google is essentially aiming to make Chrome users aware of all the lookalike sites. The feature is also useful in case if you’ve misspelled a Web link involuntary.

As ZDNet reports, the flag is in a testing phase since Chrome Canary 70 release. It is also available as an experimental feature in the latest stable version of Chrome that got rolled out recently. However, the stable version is yet to start detecting lookalike URLs.

To enable the new feature, you need to visit chrome://flags/#enable-lookalike-url-navigation-suggestions. The feature, once enabled, shows you a dropdown panel under the address bar, to reconfirm the URL that you’re about to visit. The dropdown panel includes the correct URL to highlight the misspelling on the address bar.

Google hasn’t formally announced the release of the latest feature. However, ZDNet reports that a Google Chrome engineer mentioned the feature in her presentation at the USENIX Enigma conference held in the US. It appears that the new development could soon be enabled by default.

The Tab Groups feature could help you save some memory on your system by grouping multiple tabs together. The description on the flag also confirms that the feature will be a part of Mac, Windows, Linux, and Chrome OS machines.

Folks at TechDows, who spotted the Tab Groups feature live in the Chrome Canary channel, show that it lets users add different tabs into distinct groups. 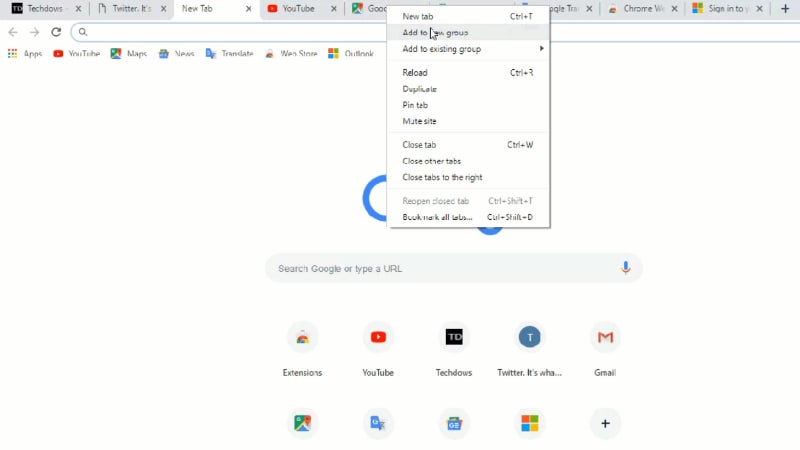 There are Add to new group and Add to existing group options that you can see after right-clicking on an active tab. However, visual separation for each tab group is yet to be found.