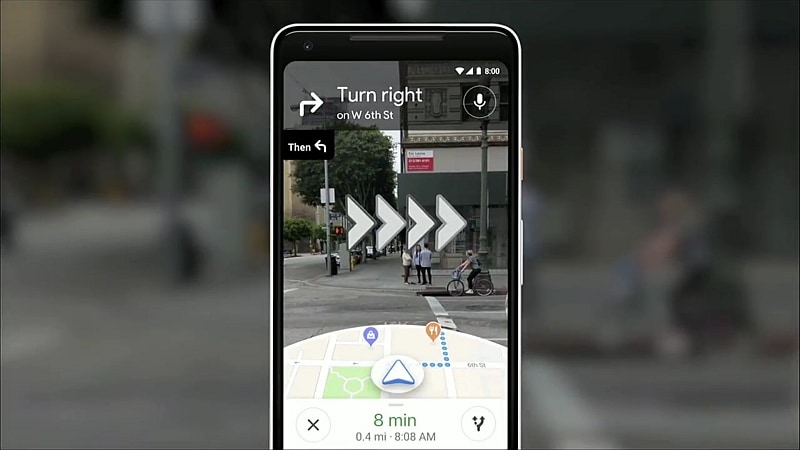 Google introduced a new augmented reality (AR) mode for Maps at I/O 2018 and it was one of the biggest crowd-pleasers at the keynote last year. The feature overlays arrows, landmarks, maps, and possibly even an animated creature to show the way in a camera view that is displaying the actual environment around the users. Ever since its announcement, the feature has been in testing, and now the company is finally ready to release it to a few local guides i.e. advanced Google Maps users. However, the commercial release will only happen when the company is ‘completely satisfied that it’s ready’.

Google gave The Wall Street Journal early access access to the AR mode feature, and the publication took it for a spin to test out its capabilities. The Maps app has a dedicated button that switches on the AR mode that opens up the camera, and starts analysing your surroundings using Street View data. The app then superimposes arrows on to the real world to show where you have to head next. The feature also gets activated if you hold your phone upright for the camera to capture the real world.

The report says that Google Maps repeatedly displays a message that reads, “For your safety, keep your phone down while you walk”. It advises users to be alert while walking, as using the feature could be distracting, and lead to accidents. The report also adds that the feature will be released soon for local guides, and “will come to everyone only when Google is satisfied that it’s ready.”

It notes that this feature is a huge step forward to how augmented-reality can be used in the navigation apps, and will be a boon when the feature can be used hands-free, like in AR glasses or the car screen. However, don’t expect it to go commercial anytime soon as Google is looking to test it heavily before making it available for everyone.

Redmi Flagship With Snapdragon 855 SoC in the Works, Redmi Note...