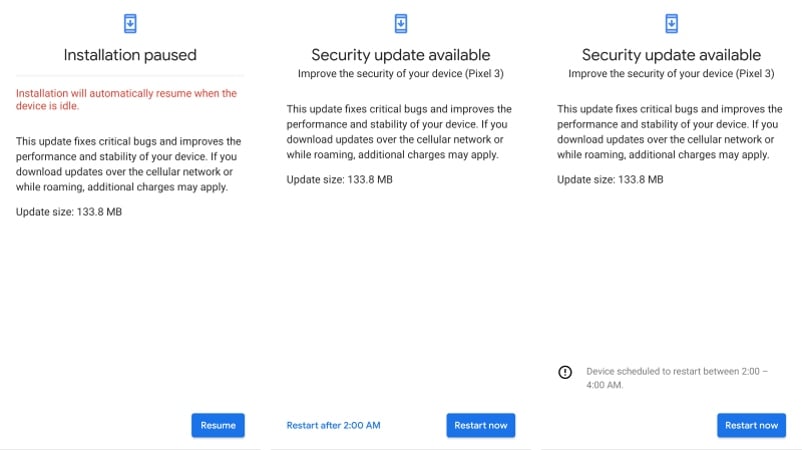 Google Pixel phones will now let you pause Android updates and schedule reboots so you can get your work done without interruptions. Downloads can also be paused manually, which might help users in situations when they need their full Internet bandwidth for other tasks. A message saying “Installation will automatically resume when the device is idle” lets users know that an update has been paused automatically, and this can also be overridden if the user chooses to do so. The ability to reschedule the phone rebooting, which is needed to complete the update process, could be the most convenient aspect of these changes, as it would help users work around a potential major disruption.

The change to the update mechanism on Google’s premium smartphones was spotted by Android Police. Gadgets 360 verified this by downloading the February 2019 update on a Google Pixel 3 (Review). The process can be paused at any stage, starting from downloading the update and including the “optimising apps” phase.

When ready, Pixel phones will ask whether you want to restart immediately or schedule a restart for after 2am. If you choose the latter option, the device will tell you it is scheduled for a restart between 2am and 4am. You will still have the option to reboot your phone whenever you want just by tapping the ‘Restart Now’ button.

The two-hour window is likely a further attempt to determine the most convenient time for a user, but there is no way to choose any other time slot with the current process. It isn’t immediately clear whether users will be able to defer the scheduled restart if they are still busy between 2am and 4am.

Although this new behaviour is first being seen with the February 2019 security patch for Android 9, Android Police also points out that it has been expected since late last year, when the text strings that now appear as status messages first popped up in a Github post.

Google’s Pixel phones receive regular Android updates including timely security patches. The February 2019 update, which was just released for all three generations of Pixel models, fixes a total of 42 known issues, with some rated ‘High’ or ‘Critical’ in importance. There are no major new features in the update, but the About section within the Settings app has now moved out of the System menu to become a top-level section, and a new Safety & Regulatory Manual section has been added.

Facebook a 'Megaphone for Hate' Against Indian Minorities: Campaign Group

Call of Duty: Infinite Warfare 2 Not in Development: Ex-Call of...