At first look, the wedding card looks like any other. It has the names of the bride and bridegroom, a symbol of Lord Ganesha, and a line mentioning how marriages are made in heaven. It’s only when you run your eyes to the bottom of the card that you notice the presence of another — more popular — entity.

On the footer of the card, Yuvraj and Sakshi — both from Surat in Gujarat — say the only gift they expect for the wedding are their guests’ vote for the BJP in the upcoming elections and a monetary contribution for the saffron cause on the party app. And then you turn the page to find a detailed analysis of the Rafale deal, headlined “Keep calm and trust NAMO” and flanked on both sides by intimidating images of the fighter jet.

The text that follows starts with the line “Even a fool will not compare prices of a simple flyaway aircraft with a weaponised jet”, before going on to provide a jumble of numbers and words aimed at defending the Modi government’s version of the deal. It also gives reasons for Reliance Defence being chosen for the offset contract, the cancellation of an earlier deal fixed by the United Progressive Alliance, and why a joint parliamentary committee cannot be allowed to conduct an investigation into the matter. 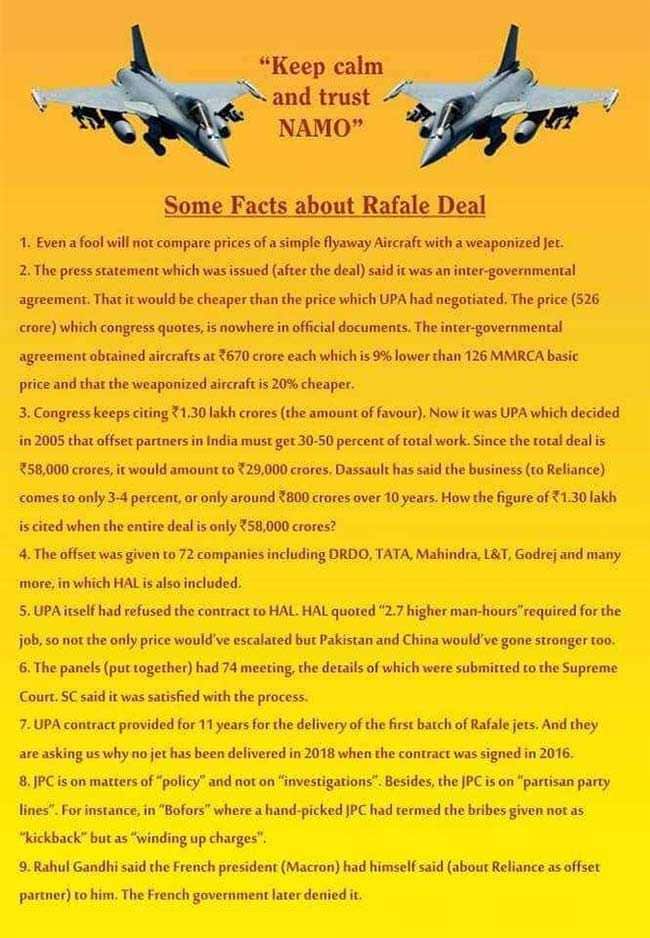 This is the second time PM Modi has featured in a couple’s wedding plans. Earlier this year, Dhaval and Jaya — also from Surat — sought a similar gift in their card.

Congress president Rahul Gandhi has accused the Narendra Modi government of inflating the price of the aircraft deal, demanding that it produce the financial details in this regard. However, the defence ministry has refused to do so on the grounds that such an action would “compromise national security”.

The opposition party also alleges that the government pressurised aircraft manufacturer Dassault and the French government into awarding the contract to industrialist Anil Ambani’s Reliance Industries. While former French President Francois Hollande hinted his agreement to the claim, his successor — Emmanuel Macron — has denied it explicitly.