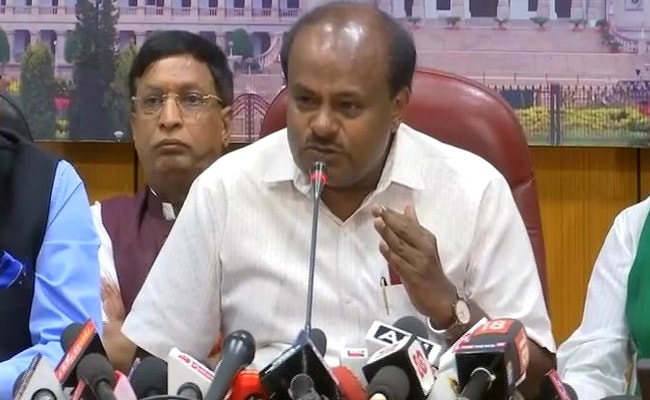 Reacting to the allegations, Mr Yeddyurappa dismissed the audio clips as ”fake” and  “a concocted story”.

At a hurriedly called press conference hours before he presents the state budget, Mr Kumaraswamy claimed that the clips were purportedly of Mr Yeddyurappa trying to lure Nagan Gouda, a legislator from his Janata Dal (Secular) or JD(S). He alleged that Mr Yeddyurappa called Nagan Gouda’s son Sharan early this morning, attempting to entice his father. “Without the knowledge of the prime minister, is it possible to do this,” he asked, saying PM Modi should come clean on the issue.

“It is a fake audio… I have not met anyone. Kumaraswamy is trying to hide his failures. This is a drama,” Mr Yeddyurappa said. He said he went to Devadurga, where the legislator’s son claimed to have met him and recorded the conversation, to visit a temple and flew back to the city.

BS Yedyurappa also dismissed a claim by the chief minister that he had spoken in the audio about a “Rs 50 crore” offer to the assembly speaker. “I will retire from politics if it (the allegation) is proven… If I had spoken like this (about the speaker), if it is proven… I will resign as an MLA and quit politics.”

The ruling coalition partners in Karnataka – the Congress and the JD(S) – have been accusing the BJP of trying to dethrone their nine-month old government with various offers, including bribe in cash and ministerial berths, a charge the BJP has rejected.

Yesterday, Mr Kumaraswamy gave away prime positions in the government to potential rebels in an effort to pacify them before the budget.

Among the beneficiaries of this move are lawmakers Pratap Gowda Patil, Basaveshwaranagar Daddal and MA Gopalaswamy. While Mr Daddal has been appointed as chairman of the Scheduled Tribes Welfare Board, Mr Gopalaswamy is the new parliamentary secretary to Water Resource Minister DK Shivakumar. Disgrunted MLA Umesh Jadhav — found to be absenting himself from Congress Legislative Party meetings despite repeated warnings — has been replaced by Mr Patil as the chairman of the Warehouse Corporation.

The chief minister will present the budget at 12.32 pm, following legislative party meetings by the Congress, the BJP and the JDS.

The Congress has issued a whip requiring all its legislators to abide by the directives of the chief whip, failing which they would be disqualified and further banned from contesting the polls for the next six years.