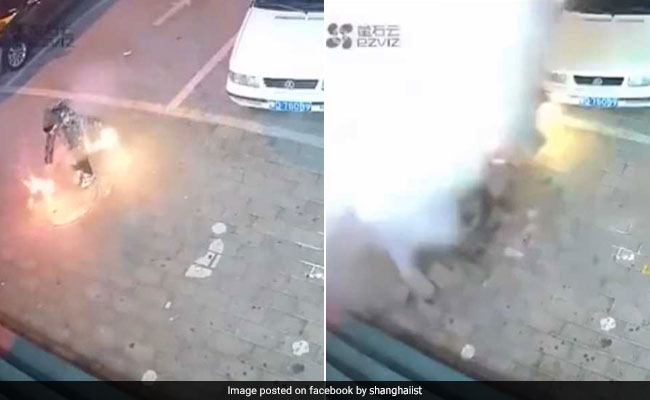 The Chinese New Year is traditionally celebrated with firecrackers, as it is believed that they drive away evil spirits. However, when used irresponsibly, these firecrackers can spell trouble. A young boy in China learned this the hard way when he put firecrackers down a manhole – and immediately blew up the whole sidewalk.

The terrifying incident was captured on camera, and the video has now gone viral. According to Shanghaiist, the incident occurred in China’s Inner Mongolian city of Chifeng.

In the video, shot last Wednesday, a boy is seen dropping some lit fireworks through a manhole cover before quickly retreating. Within seconds, a huge explosion blows up the entire sidewalk. Thankfully, the boy manages to escape unharmed.

Watch the surveillance footage below:

Since being shared online, the video has gone viral on Chinese social media platforms like Weibo and collected a ton of comments.

“Whatever happen to common sense?” wonders one commenter on Facebook. “It’s all the gases that buildup in sewers,” another explains.

In August last year, a family had a very narrow escape in China after their electric scooter exploded inside the house.