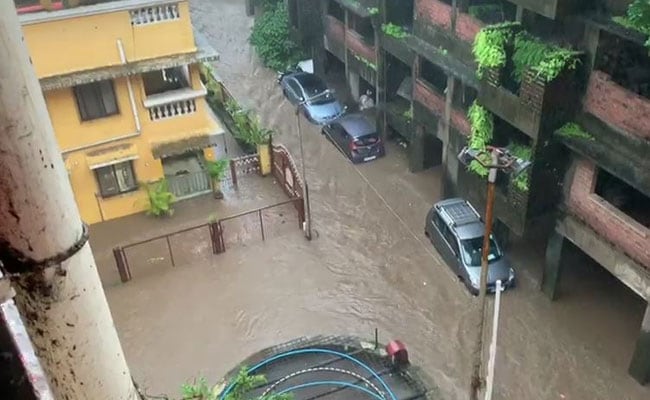 Many parts of Mumbai and adjoining areas received heavy rain overnight. This has led to waterlogging in many areas including Goregaon, Kandivali and Dahisar.

The downpour has led to waterlogging on the Central Railway line too, leading to 15-20 minute delay in suburban train services on the route. Chief Public Relations Officer of the Central Railway Sunil Udasi said trains on the line are running at a “cautious speed” as a precautionary measure.

Flight services at Mumbai airport have largely been unaffected so far.

Mumbai’s municipal body, the Brihanmumbai Municipal Corporation (BMC), has warned residents to avoid going near the sea following the possibility of a high tide, which is expected to hit the city later today.

India Meteorological Department senior officer KS Hosalikar said the 4.90 metre tide is expected to hit the city this afternoon. “The highest high tide of the four monsoon months is also today of 4.90 metres at afternoon, exactly during the period when IMD has forecast intense rains for the city. Heavy rainfall warnings on very high tide day in Mumbai is not a good combination please. Avoid outing, beaches,” he tweeted.

He said intense rain will continue in north Konkan areas including Mumbai, Thane and Palghar for the next four to six hours. All government schools in Thane have been closed for today as per the order issued by the Municipal Corporation in view of continuous rainfall in the city, news agency ANI reported.

The met department has forecast “intense heavy rainfall” in the city till Sunday.

As per weather forecast, Intense spells of rain likely to continue in the next 4 hrs and heavy to very heavy rainfall in the next 24 hrs.

We request Mumbaikars to take adequate precautions & ensure safety. #Dial100 in case of any emergency.

Mumbai has been facing incessant rain and waterlogging for past few days. Earlier, 17 flights had been diverted and several were delayed by 30 minutes on average due to heavy rains. Rail services too have been hampered by the intermittent rains.