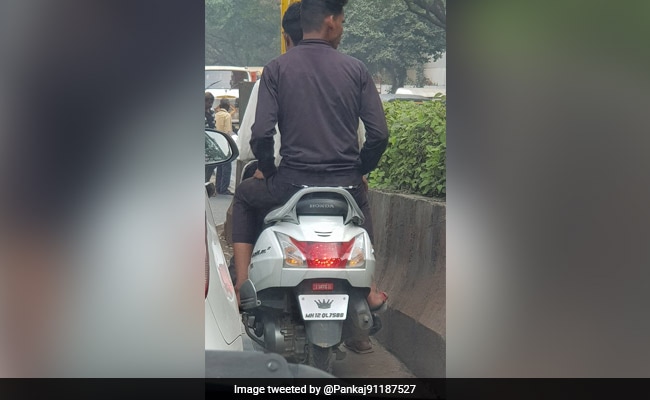 “His highness will unfortunately have to oblige us with a Challan soon!” Pune Police tweeted.

Twitter users had a hearty laugh after the Pune police’s witty response to a picture of two men riding a scooter with a number plate that has a sticker.

A Twitter user named Pankaj posted a picture showing the registration plate of a White Honda scooter bearing a crown sticker and tagged the Pune Police.

Mocking the vehicle owner’s choice of sticker, the Pune Police tweeted,”His highness will unfortunately have to oblige us with a Challan soon!”

His highness will unfortunately have to oblige us with a Challan soon!#TrafficRules#TrafficViolationhttps://t.co/rgq6OFInSF

The Pune Police’s tweet has got nearly 2,700 likes and has been retweeted over 400 times.

Twitter users praised the Pune Police’s use of humour. “Whoever is handling the account, deserves appreciation,” a person named Vivek wrote. Pune Commission of Police Dr Venkatesham replied to the user saying, “Will do. The teams really put their head together to find best ways to stay connected with the masters (people).”

“The handler of this account must be given an awarded for being the most humorous cop of the year,” a Twitter user named Aishwarya Palagummi wrote.

The handler of this account can be awarded the most humorous cop of the year.

Another Twitter seemed to be in awe of the witty response, “This handle is awesome. Indian police on twitter have really made their presence felt with humor and politeness. It’s a tough job, but you guys are doing great!”. Other users responded with memes and GIFs.