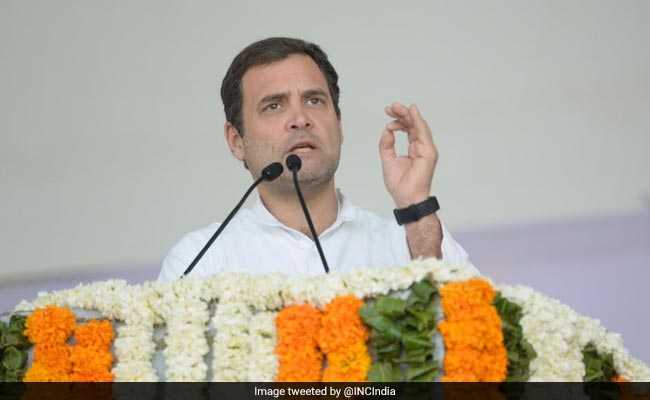 The signal from the recent assembly elections in Rajasthan has been very clear — its farmers and rural votes gave the Congress the winning edge. This is the section the Congress would focus on in the run-up to this year’s national elections, Congress chief Rahul Gandhi indicated today. For his first rally in Rajasthan after the assembly election victory, Mr Gandhi set the tone for the campaign for the coming elections, promising loan waivers across the country if the party is voted to power.

Admitting that farm loan waivers don’t solve the problem, Mr Gandhi said, “This is just a step in the right direction… We need a new strategy for farmers in this country. We need another green revolution”.

Addressing farmers who had come from all across Rajasthan to Jaipur’s Vidhyadhar Nagar, Mr Gandhi thanked them for voting the party to power.

“The problem of farmers is the same everywhere,” he said. “In the assembly elections, we promised loan waivers in 10 days, we did it in two. The message for Narendra Modi is that you have to waive loans or we will not let you sleep at night. If we come to power in 2019, we will waive loans.”

Exporting farm produce, technology and setting up food processing units were some of the suggestions he had for improving the farming sector. “The country’s farmers are on the backfoot… we want them to step out and hit sixers,” he said.

But it was Chief Minister Ashok Gehlot who got down to brass tacks.

“We won’t increase electricity tariff for farmers in Rajasthan for the next five years… 1 lakh agricultural connections will be given until June this year,” Mr Gehlot said to loud cheers.

“Farmers with 10 hectares of land, who set up food processing units, will not need to go in for land use change and the Rajasthan government will give 1000 crores to start procurement under Minimum Support Price if central funds don’t come on time,” Mr Gehlot announced.

The Congress, which lost all 25 Lok Sabha seats in the 2014 election and barely managed to reach the 100 majority mark in the 200-member state assembly, is looking for a major comeback in the Lok Sabha polls. But it is yet to make all farmers happy.

Prabhati Lal Saini, a farmer from Jhujhunu with an Rs 11 lakh loan who came for the rally, said he was a little disappointed, as only the defaulting farmers are benefiting from the loan waiver scheme.

“I borrow money to repay at least my interest if not the principal amount, so I am not benefitting from the loan waiver scheme. Those who are defaulters, only they are getting benefits,” he said, suggesting that loans upto Rs 2 lakh should be waived for all farmers.

Another farmer, Bheru Lal from Pratapgarh in south Rajasthan, echoed his sentiments. “We don’t get a good price for our produce in the local markets. So after we harvest our crops, we migrate to neighbouring states and work as daily wagers to sustain ourselves,” he said.