Just a few months after launching its flagship Mate 20 Pro in India, Huawei says it has surpassed itself with the new P30 Pro. Many companies launch multiple top-end phones in a year, and some, like Huawei, alternate between product lines that target slightly different sets of buyers. While the Mate 20 Pro is an all-rounder that emphasises design and processing power, Huawei’s P-series is all about photography. With this launch, the Chinese giant has introduced a 5X optical zoom camera and a brand new type of sensor, in a direct challenge to Apple, Samsung, and Google’s best offerings. We’ve been able to spend a little time with a Huawei P30 Pro unit ahead of its official launch, and here are our first impressions.

Besides its cameras though, the Huawei P30 Pro has a lot to boast of. The device looks great, with glass on the front and back curving inwards at the sides, sandwiching a thin metal frame. The construction quality is top-notch and we could barely feel the seams. Huawei says everything about this phone, from the colours to the alert sounds, has been inspired by nature.

The company has shown off four colour variants internationally, which are meant to represent the different times of day and night. Strangely, it looks as though only the Aurora and Breathing Crystal options will be coming to India; not even the plain black. Our Aurora unit is definitely attention-grabbing with its colour-shifting blue and purple gradient rear and bright blue frame, but we think some people would prefer a more understated option.

On the front of this phone we have a 6.47-inch OLED screen with a small ‘dewdrop’ notch at the top. There’s no earpiece — instead, the top part of the screen vibrates to produce sound. There’s also an in-display fingerprint sensor, which Huawei says is improved compared to previous models. These are both things that we’ll need to test in detail in our full review.

The screen on the Huawei P30 Pro is HDR-capable and is said to support the wide DCI-P3 colour gamut. It definitely looked sharp and vibrant to us in our initial experience with the device.

This Huawei P30 Pro is large and a little unwieldy. Moreover, it feels a little top-heavy, and we were a little apprehensive of dropping it when holding it up to take photos because of the curved glass sides. The P30 Pro is not too difficult to grip, though. The rear definitely does pick up a lot of smears and smudges, you’d have to look closely to notice them because of its constantly shifting colours.

The main attraction of the P30 Pro is of course the camera setup on the rear which has already broken DxOMark’s records. There’s a somewhat raised vertical strip with three cameras. Starting from the top we have a 20-megapixel wide-angle camera, the main 40-megapixel camera, and then the 5X telephoto periscopic camera below it. Huawei says that the actual lens mechanism is laid out horizontally across the width of the phone, and a prism bends light by 90 degrees in order for shots to be captured. There’s also a time-of-flight depth sensor to the right of the module, and a dual-LED flash above it. All four rear cameras feature Leica optics. The main camera has an f/1.6 aperture, OIS, and a new type of sensor that Huawei calls SuperSpectrum. It’s designed with RYYB instead of RGB filters, which is supposed to be able to capture 40 percent more light. We’ll see what this means for night-time photography in our full review.

The zoom camera on the Huawei P30 Pro is said to be capable of 5X optical zoom, 10X “hybrid” zoom, and 50X digital zoom — that too with optical stabilisation. This could be a game-changer for smartphone cameras, and we’ll be taking full advantage of this range when we test the Huawei P30 Pro’s cameras as part of our in-depth review process.

As for standard specifications, we have Huawei’s own top-end Kirin 980 processor with eight total cores of three different types, for optimum power efficiency. There’s 8GB of RAM, and options of 128GB, 256GB, and 512GB of storage internationally. Huawei might not launch all these options in India.

The Huawei P30 Pro packs a 4200mAh battery, and you get a 40W SuperCharge charger in the box with this phone. 15W wireless quick charging is supported, and you can wirelessly send power to other devices using the 2.5W reverse charging feature. 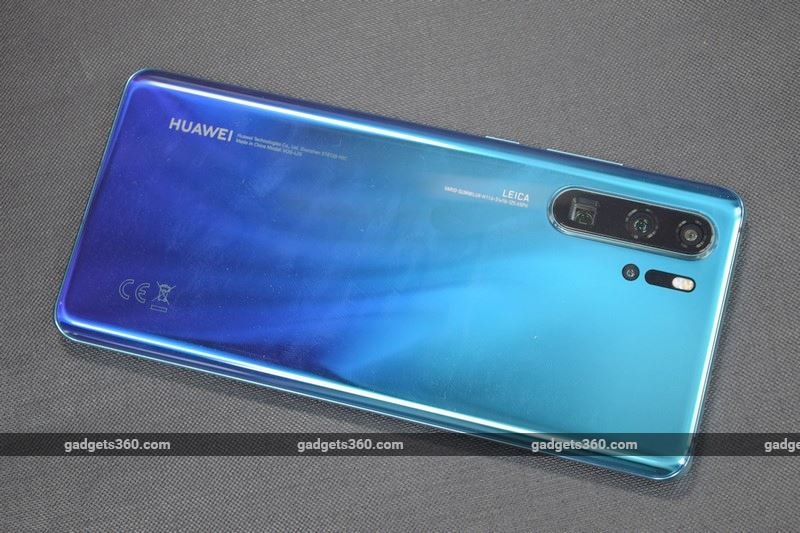 With the Huawei P30 Pro, you also get dual-band Wi-Fi 6, Bluetooth 5, GPS on two bands, NFC, and of course 4G LTE on both SIMs. However, thanks to the hybrid dual-SIM design, you’ll have to sacrifice a second Nano-SIM if you want storage expansion. Rather than standard microSD cards, the P30 Pro can only use Huawei’s own proprietary Nano Memory Card format. There’s also no 3.5mm audio jack.

Huawei’s new EMUI 9.1 skin runs on top of Android 9 Pie and introduces a more spaced-out icon grid with new designs everywhere. General performance when moving through the UI and some of the preinstalled apps was great, and the P30 Pro felt very snappy in the little time we spent with it. Under the hood, Huawei promises speed improvements thanks to a new file system and software tweaks including GPU Turbo 3.0 for games.

We’ll soon have a full review of the Huawei P30 Pro here at Gadgets 360, in which we’ll spend a lot of time with this phone’s cameras as well as examine its general performance, battery life, software, construction quality, and much more.

The Affair Season 5, Episode 1 Now Streaming on Hotstar in...