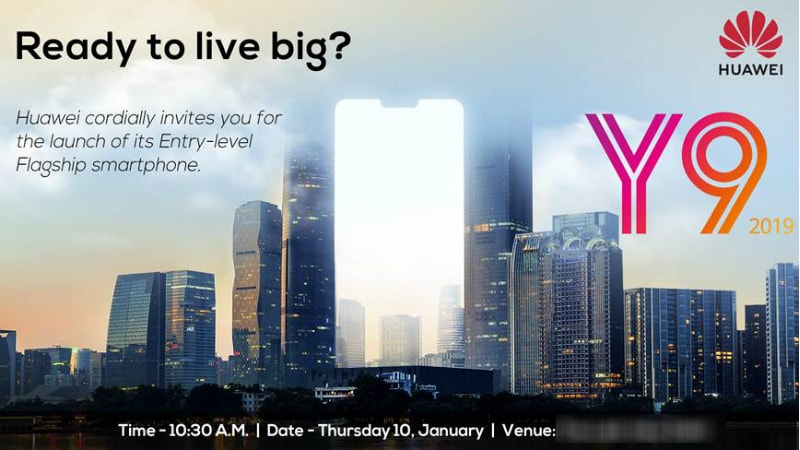 Huawei Y9 (2019) has received a new India launch date. The smartphone will now be launched in India tomorrow, January 10, which has been rescheduled from its original India launch date of January 7. Thus far, we already know the smartphone will be an Amazon exclusive. We also already know all of Huawei Y9 (2019) specifications, thanks to an unveiling earlier this year. Key highlights of the Huawei Y9 (2019) include a 6.5-inch display with a notch, dual rear and front cameras, HiSilicon Kirin 710 SoC, and a 4,000mAh battery.

The revised media invite confirms that the Huawei Y9 (2019) launch has now been scheduled for January 10. Huawei is hosting a press event in New Delhi to make the new announcement. Price and availability schedule of the smartphone is likely to be revealed at the event.

Meanwhile, Amazon India has made a dedicated microsite for the Huawei Y9 (2019) to confirm its exclusive availability on Amazon.in. The online listing also confirms that the handset will come bundled with Boat Rockerz Sports Bluetooth headphones worth Rs. 2,990.

In terms of connectivity, the Huawei Y9 (2019) has 4G LTE, Wi-Fi, Bluetooth, GPS/ A-GPS, and Micro-USB. Sensors on board include an ambient light sensor, digital compass, gravity sensor, gyroscope, and proximity sensor. The smartphone also sports a fingerprint sensor at the back that supports Fingerprint 4.0 identification technology. Besides, it packs a 4,000mAh battery.

Who Is in the Driver's Seat in Battle for South Korean...