South Korean car maker Hyundai on Monday gave a look at work it is doing on a vehicle with robotic legs to let it walk or crawl over treacherous terrain.

Hyundai showed off its Elevate project on the eve of the Consumer Electronics Show gadget extravaganza, billing it an unprecedented “Ultimate Mobility Vehicle” that combines technology from electric cars with robotics.

“What if a car designed with robotics could save lives in disasters,” said Hyundai executive John Suh, who heads a Cradle arm of the company devoted to innovation.

“The need for search and rescue, and humanitarian aid, is growing around the world.”

Elevate is designed with four mechanical legs with wheels for feet, according to a small-scale model shown at the press event.

Elevate vehicles can roll along on extended legs or retract them to be driven like a car.

Extended legs could also be used to climb or crawl while keeping the passenger compartment level, according to David Byron of Sundberg-Ferar, an industrial design consultancy, which is working with Hyundai on the project. 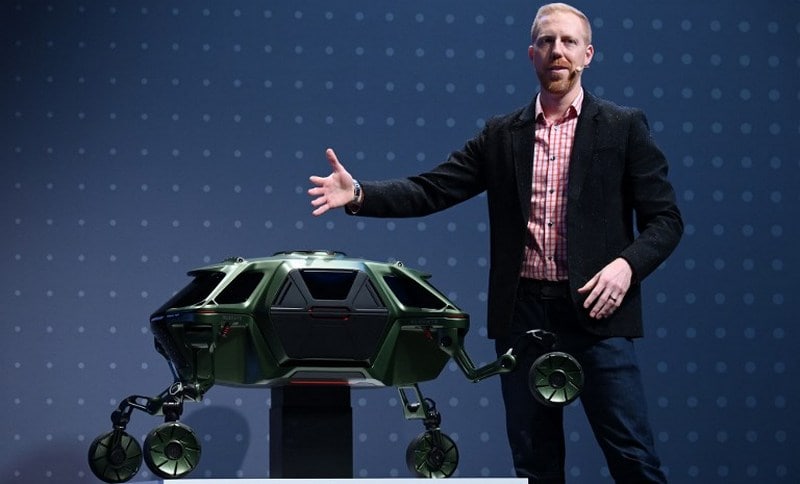 “This design is uniquely capable of both mammalian and reptilian walking gaits, allowing it to move in any direction,” Hyundai said in a release.

Elevate can climb over walls as high as five feet (1.5 meters) while keeping the vehicle body level with the ground, Byron said.

Hyundai has been working on the walking car for three years, according to the company.

Examples of how this might be used included being able to carefully extract injured people from disaster zones or rugged terrain.

“It can go where no vehicle has gone before,” Suh said.

An scaled-down model of Elevate along with video of how it would perform were displayed at the CES press event.

“This technology goes well beyond emergency situations – people living with disabilities could hail an autonomous Hyundai Elevate that could walk up to their front door, level itself, and allow their wheelchair to roll right in,” Suh said.

“The possibilities are limitless.”

For example, an Elevate stuck in snow on a roadside could get up and walk back to lanes of traffic, or the vehicle could be put to work exploring other planets.

AutoPacific market research vice president Daniel Hall considered the Hyundai project “interesting,” noting that while robotic vehicles are already used by the military to deal with bombs “climbing obstacles in certain situations can be helpful.”

For Hyundai, the project is also a chance to demonstrate that, like rival car makers, the company is pursuing innovation, Hall added.