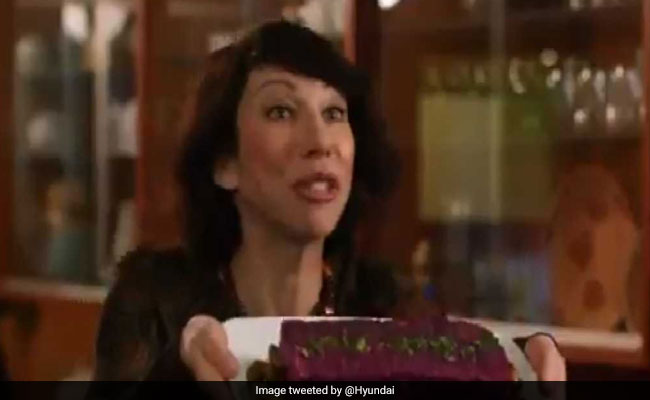 The metaphor at the center of Hyundai’s Super Bowl commercial was simple: An oversize elevator operated by a wisecracking Jason Bateman took passengers up to pleasurable experiences and down to life events everyone wants to avoid.

At another point, the doors open onto a courtroom scene as a grizzled defendant stands up, glares at the man ushered off the elevator and growls.

“This stop: Jury duty,” Bateman declares. “Remember, innocent until proven . . . well, he did it, right? We all agree he did it?”

But one stop in the otherwise innocuous elevator bit has ruffled some feathers, or at least some 100 percent recycled polyester down equivalents.

“Vegan dinner party,” Bateman says as the doors ding open. “Is that even a thing?”

“We’re having beetloaf – Sergio’s specialty,” says the smiling host as she approaches her guests while extending a purple gelatinous concoction.

Sergio takes a bow while one of the dinner guests retches.

Then the ad pivots to the conceit of the commercial: The heavenly experience of purchasing a Hyundai.

But vegans felt personally attacked. Why should their decision to live a planet-friendly, animal-cruelty-free lifestyle be comparable to a colonoscopy or a root canal or a teenager getting “the talk” and hearing about how “even Grandma’s body changed.”

People for the Ethical Treatment of Animals, the animal rights organization more commonly known as PETA, chided the car company on Twitter.

“The trend of 2019 is taking the elevator UP to vegan dinner parties (and an Earth, heart, & animal-friendly lifestyle),” the organization said before attempting to hit Hyundai where it hurts:

“Instead of buying a car from people with outdated ideas, we suggest a vegan Smart car by Mercedes. great mileage & acceleration, turns on a dime.”

PETA’s Twitter feed was working overtime during the Super Bowl. The group criticized Atlanta rapper Big Boi for making his grand entrance with a full-length fur coat and wagged its finger at Budweiser for touting its wind-powered factories with a commercial full of bridled horses pulling a wagon.

But its criticism of Hyundai resonated with a lot of people who abstain from eating things with mothers and faces. Some shared their vegan Super Bowl party spreads. Others declared that they were in the market for a new car and that it most definitely wouldn’t be a Hyundai.

“We are responding in social media that we totally respect veganism and are happy that it has become mainstream,” said Michael Stewart, a spokesman for the car company. “We also hope that vegans have a sense of humor just like the dentists, parents, judges, flight attendants, doctors and even car dealers, the others stops represented on ‘The Elevator.’ “

Stewart said overall reaction to the ad “has been terrific.” The ad was fourth in USA Today’s Ad Meter, a ranking done by fans, and it was the top automotive spot.

By the time the Super Bowl was over, the car company had extended a peace offering: The recipe for beetloaf.