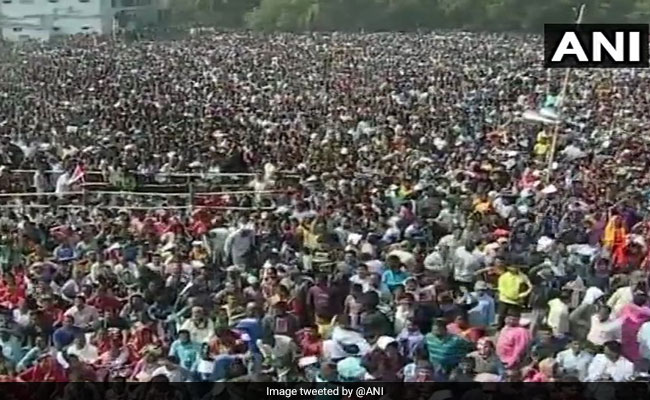 Several people, including women, were injured at Prime Minister Narendra Modi’s rally in West Bengal’s Thakurnagar today. PM Modi had to interrupt his speech several times to urge people to calm down.

Several youngsters were seen climbing over bamboo barricades at the rally ground that was packed with people, including women and children.

Security personnel were seen ushering women and children out. And at one point, there was an effort to create space by removing chairs that had been laid just after the D-zone barricades.

Mr Modi initially made a political point of it, saying, “I am seeing the huge crowds and beginning to understand why Didi is resorting to violence. This is your love, they are fearful of it and in the name of democracy, they are disrupting it.”

But with chaos worsening, the Prime Minister appeared to cut short his speech which lasted under 15 minutes and left.

After his departure, however, as thousands of people streamed out of the rally ground down a single dust lane — the only road in the area — eyewitnesses said there was a stampede-like situation. Further reports are awaited.

For the Prime Minister, the Thakurnagar visit is significant.

Thakurnagar is part of the Bongaon Lok Sabha seat whose MP, Trinamool’s Mamatabala Thakur, is also the daughter-in-law of the Thakur family that heads the Matua community headquartered at Thakurnagar. She was married to Boroma Bani Devi’s older son, Kapil Krishna Thakur, who passed away some years ago.

Boroma Bani Devi, the 100-year-old matriarch of the Matuas, lives with Mamatabala Thakur and is known to be very close to Mamata Banerjee and has even shared the dais with her in the past.

There was a lot of speculation over whether PM Modi would meet her or not. But he set all that to rest today, walking up to her home for a conversation that lasted about five minutes.

He was led into the house by Boroma’s younger son, Masanjul Krishna Thakur, who quit as minister in the Mamata Banerjee government and drifted towards the BJP.

As a direct descendent of Hari Chand Thakur, who founded the Matua sect, Santanu is considered the head of the Matuas. He was the one who invited PM Modi to address the Matua mahasammelan in Thakurnagar today. He had also contested against his aunt Mamatabala Thakur in the 2014 Lok Sabha polls, but lost.