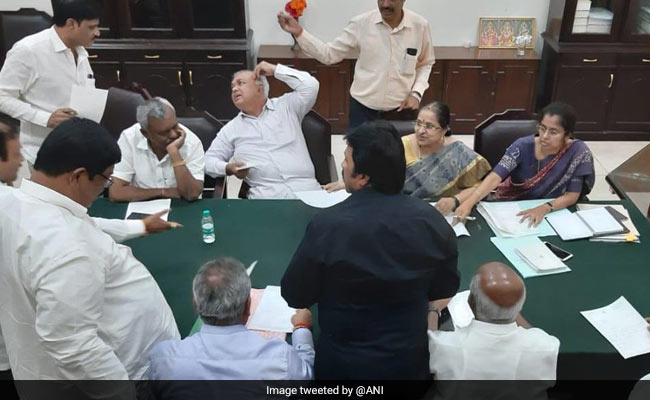 In what could spell big trouble for the coalition government in Karnataka, eight Congress and three Janata Dal Secular legislators have reached the office of the state assembly speaker, reportedly to submit their resignation. The speaker, KR Ramesh Kumar, however, is not in office and the legislators are waiting for him. If these legislators do quit, the coalition government’s numbers will fall down to 105 in an Assembly where the majority mark is 116.

“I have come to submit my resignation to speaker. I don’t know about my daughter (Congress MLA Sowmya Reddy), she is an independent woman,” Congress legislator Ramalinga Reddy told news agency ANI. “I am not going to blame anyone in the party or the high command. I somewhere feel I was being neglected over some issues. That is why I have taken this decision,” he added.

Karnataka minister DK Shivakumar, trouble shooter for the Congress in the state, however is trying to keep the flock together. “Nobody will resign. I had come to meet the MLAs,” he said after meeting the Congress and JDS legislators at the Speaker’s office.

Deputy Chief Minister G Parameshwara and Mr Shivakumar have called an emergency meeting of legislators and corporators, news agency ANI has reported. The crisis comes at a time when state Congress chief Dinesh Gundu Rao is travelling and Chief Minister HD Kumaraswamy also happens to be on a private visit to the US.

The BJP, which has 105 legislators, says the party has nothing to do with the walkout by the Congress legislators – and says if the government falls, the BJP should be invited to form government.

“Congress-JDS coalition has been rejected by people of Karnataka. Despite their coalition in Lok Sabha polls, BJP won a massive mandate. It clearly shows the mood of people. MLAs certainly seem to be facing brunt of public anger against coalition,” said the BJP’s GVL Narasimha Rao.

On Monday, two Congress legislators, Anand Singh and Ramesh Jarkiholi had resigned, bringing the ruling coalition of the JDS and the Congress down to 116. The resignation of the two legislators has not been formally accepted though.

Anand Singh said he was resigning as he was unhappy with a land deal between the state government and JSW Steel in his home district of Ballari. Mr Jarkiholi gave no reason in his resignation letter. But he had distanced himself from the party ever since he was dropped from the cabinet — skipping party meets and holding meetings with other MLAs believed to be unhappy with the Congress.

In the 224-member Karnataka Assembly, the Congress has 79 legislators including Mr Singh and Mr Jarkiholi.

Coalition partner JDS has 37 legislators. It also has the support of a BSP legislator and an Independent. Even without two lawmakers who quit, the coalition still has a majority with 116 legislators.

The Congress-JDS coalition had an extremely poor showing in the Lok Sabha elections with both parties only managing to win one each of the state’s 28 seats. The rest were scooped up by the BJP, led by former Chief Minister BS Yeddyurappa. The two parties had joined forces after the assembly elections last year in May to keep the BJP out of power.