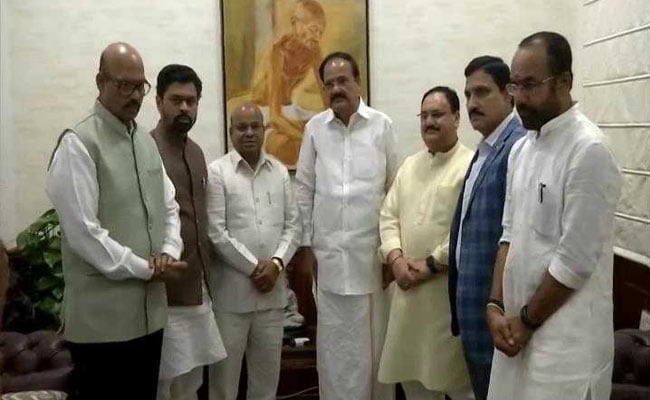 Four of the six parliamentarians in Chandrababu Naidu’s Telugu Desam Party today joined the BJP. This evening, the Rajya Sabha members met Vice-President Venkaiah Naidu, who is also the chairman of the upper house, and gave him a letter that said they have “decided to merge with the BJP” with immediate effect.

The rebel leaders moved as party chief N Chandrababu Naidu is in the US on vacation.

Mr Naidu had quit the NDA last year and became one of the key interlocutors of the opposition. But his plan failed spectacularly.

Arch-rival Jaganmohan Reddy, the chief of the YSR Congress, not only won the state elections, but also scooped up 22 of the state’s 25 Lok Sabha seats.

Earlier today, two of them had announced their intention.

“Yes I am leaving the TDP. I will join the BJP,” Telugu Desam Party’s TG Venkatesh was quoted as saying by news agency ANI. “I have been a former member of ABVP and the BJYM (the BJP youth wing),” he added earlier today.

The party’s senior leader YS Chowdary also admitted that he was switching camp.