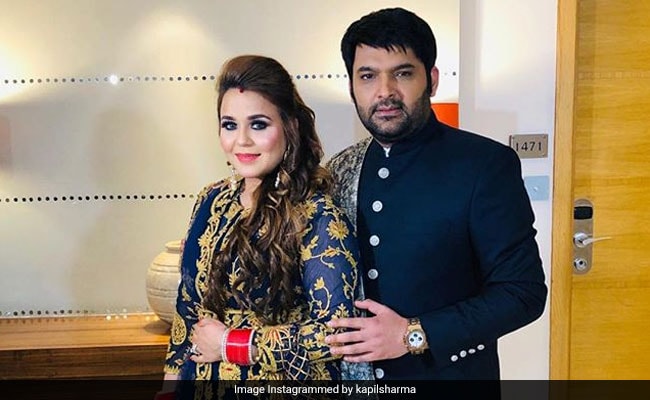 Kapil Sharma and Ginni Chatrath, who got married in Jalandhar in December last year, hosted their third wedding reception in Delhi on Saturday. Sharing a photo from their reception in the capital, Kapil wrote: “Celebrations are unstoppable. Need your blessings.” The picture features the newlyweds dressed in traditional outfits. While the stand-up comedian wore a black bandhgala with white pyjama, Ginni was dressed in a navy blue and golden anarkali. The wedding reception was attended by Sohail Khan, Yuvraj Singh, Vatsal Sheth and Mika Singh. Vatsal, whose wife Ishita Dutta had shared screen space with Kapil Sharma in Firangi, shared a glimpse from the reception on his Instagram timeline.

Photos and videos from Kapil Sharma and Ginni Chatrath’s Delhi reception were curated by fan clubs. One of the videos features Kapil shaking a leg with Sohail Khan. Other photos also feature Suresh Raina with his wife Priyanka and Ambassador Of France To India, Alexandre Ziegler.

Take a look at the photos and videos here:

Kapil Sharma and Ginni Chatrath married in a two-part wedding ceremony. After the Hindu ceremony, the couple exchanged wedding vows as per Sikh traditions. Their Anand Karaj was also held in Jalandhar. After the wedding, they had hosted their first reception in Amritsar. The second reception which was held in Mumbai was attended by Deepika Padukone and Ranveer Singh, Karan Johar, Kartik Aaryan, Kriti Sanon, Rekha, Anil Kapoor, Farah Khan, Sonu Sood, Raveena Tandon, Dharmendra, Jeetendra, Sohail Khan, Salim Khan and others.

On the work front, Kapil Sharma returned to the small screen with a new season of The Kapil Sharma Show after a hiatus of nine months.