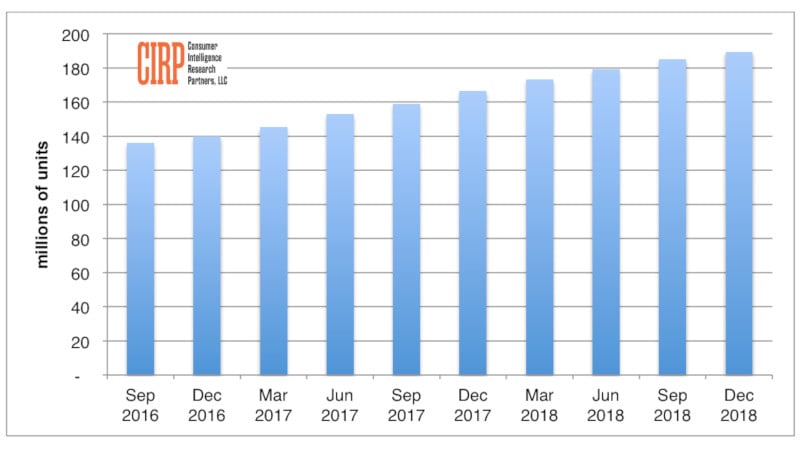 Apple sold 62 million iPhone units in the last quarter, down from 77.3 million units during the same period last year, claims a securities research firm. The firm adds that even though the quarterly iPhone sales were down globally, the Cupertino-based company’s overall iPhone install base in the US rose to 189 million units from 185 million units in September quarter. Apple has stopped sharing unit sales for its products, so there are no longer any official figures for the iPhone unit sales.

According to a report by Consumer Intelligence Research Partners (CIRP), the research firm derived the iPhone unit sales number from the estimated average selling price (ASP) of iPhone and Apple’s iPhone revenues. CIRP calculated the ASP to be $839 for the quarter ending December 2018. It noted that the global iPhone install base increased 2 percent from the September quarter and 14 percent from the December 2017 quarter. The install base jump was 5 percent for the United States over the September quarter and 19 percent over the same period last year.

“As Apple itself indicated, iPhone revenues declined relative to last year, driven primarily by reduced demand in overseas markets. US sales remain relatively stable, which shows up in slight growth in the US installed base,” said Josh Lowitz, CIRP Partner and Co-Founder.

Earlier, Apple had revealed in its quarterly earnings report that it now has a global iPhone install base of 900 million iPhones. The company added that its iPhone revenue declined 15 percent year-on-year to $51.9 billion (roughly Rs. 3,70,000 crores), however its services revenue increased to $10.8 billion (roughly Rs. 77,000 crores).