In an extensive interview to NDTV, he also argued that many of the BJP’s policies — from farm loan waivers in Uttar Pradesh to the central scheme for subsidised cooking gas to economically deprived families — have failed to achieve much.

Coalition governments in the past, he said, have made a better showing than the Prime Minister’s track record in the last five years. “In a democracy like ours, coalition is necessary… (former Prime Ministers) Narasimha Rao and Manmohan Singh have contributed to the development of this country, according to me,” said the Karnataka Chief Minister, who was a part of the central alliance more than a decade ago.

“Very lightly, the PM criticises the mahagathbandhan. I am watching that,” said Mr Kumaraswamy, who had taken the first concrete step towards building a united opposition front, converting his oath ceremony in May to an unofficial gathering of opposition leaders. 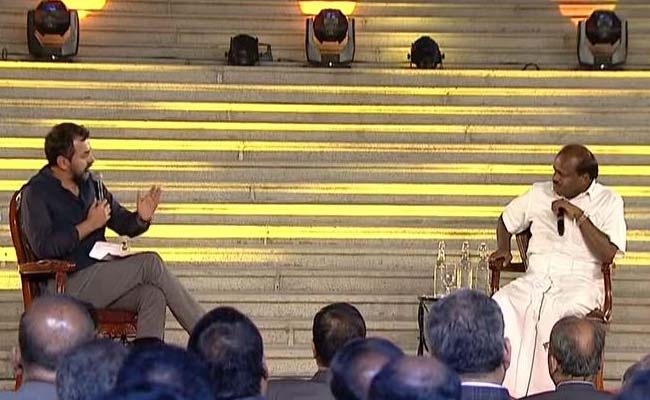 In an extensive interview to NDTV, HD Kumaraswamy said the BJP’s efforts to strike a deal with the AIADMK is questionable.

“Narendra Modi’s alliance with Nitish Kumar after the mandate of Bihar citizens – is that a holy alliance?” Mr Kumaraswamy said.

The BJP’s efforts to strike a deal with the AIADMK is also equally questionable, added the leader of the Janata Dal Secular,  which came to power in Karnataka last May after striking a deal with the Congress.

Mr Kumar had struck an alliance in June 2017 a day after ending the tie-up with the Congress and Lalu Yadav that had stormed to power in 2015. Mr Kumar had justified his move, pointing to the corruption allegations against his deputy Tejashwi Yadav, the son of Lalu Yadav.

But outraged opposition leaders had called it a blatant attempt by the BJP to capture power in the state by ignoring the wish of the electorate, which had voted it out of power.

The BJP is trying to strike a deal with the ruling AIADMK of Tamil Nadu, which has been accused of corruption by the opposition in the state.

Earlier this month, PM Modi had heaped ridicule on the Opposition, saying their idea of Mahagathbandhan (Grand Alliance) is a Maha Milavat (Grand Adulteration) and the people are aware of it. Speaking from the floor of the Lok Sabha, he said, the people would not vote for “a milawat ki sarkar (adulterated government)”.