Real Madrid midfielder Isco has appeared to criticise his manager Santiago Solari on social media, claiming that he has not been given the same opportunities as his​ teammates.

The 26-year-old has seen very little game time since Solari was appointed manager at the Santiago Bernabeu in November. He is yet to start a La Liga match under the Argentine and did not make it off the bench against Barcelona in Wednesday’s Copa del Rey semi-final first leg.

Former ​Real Madrid and Spain midfielder Ruben de la Red this week told EFE (quoted by ​Marca) that ​Isco cannot expect to get first team chances if he is not performing to the same level as his teammates.

“The players at Real Madrid are all very good and those who aren’t up to it are overtaken by their teammates,” said De la Red.

Isco responded on Twitter, claiming that he agrees with De la Red’s assessment but feels that Solari has not given him the chances to prove himself.

“I totally agree with De la Red, but things change when you do not enjoy the same opportunities as your teammates,” he posted.

“I still keep working and fighting hard waiting for [the opportunities]. Hala Madrid!” 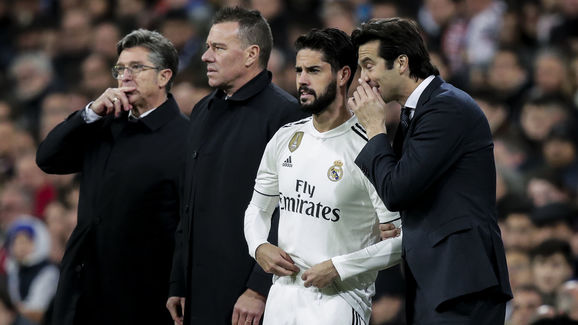 Isco has been linked with a move away from Real Madrid next summer if Solari remains in charge, with ​​Chelsea, ​Manchester City and Paris Saint-Germain rumoured to be among the interested parties.

The former Malaga man will not come cheap though – he remains under contract until 2022 and has a €700m release clause.

How Liverpool Players Got on During the September International Break

Chelsea: How the 4-3 Win Over Slavia Prague Proved Maurizio Sarri's...