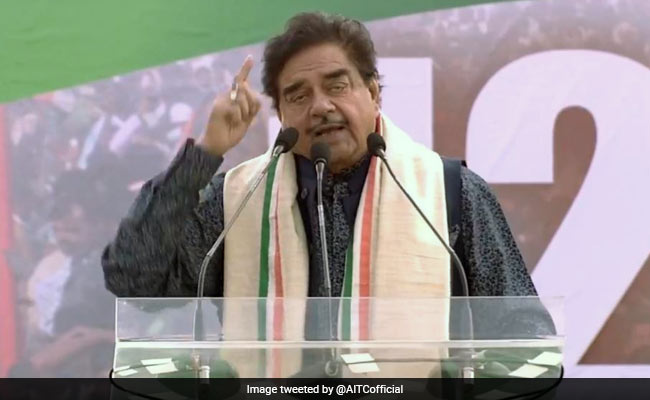 The government’s promise of yearly cash help to farmers in the interim budget couldn’t impress BJP dissident Shatrughan Sinha, who said today that the pledged aid was not enough. In an attack on Twitter, Mr Sinha, who misses no opportunity to attack his party’s leadership, said that the amount offered was “insulting and humiliating”.

The government announced Rs 6,000 annual cash transfer to farmers with land holding less than 2 hectares. The budget promise was slammed by Congress president Rahul Gandhi, BJP’s main rival. “You can waive Rs 3.5 lakh crore loan of 15 people, but give only Rs. 17 per day to farmers. What else is this if not an insult?” he had said.

“The kind of support given to our farmers is very disappointing. After such a tiring long wait, it’s insulting & humiliating to be given 6000/yr spread quarterly, i.e.17/- per family/ day, in today’s times. Sir, do give it a serious thought, as is never to late. Jai Hind!” Mr Sinha said today.

He also said that the budget was not a “vote of account” but an “account of votes”.

“In my opinion, we are putting energy & money, on the Union Budget especially when only 2-3 mths left to fulfill & implement all the promises made in the budget. Even our learned, senior leader,experienced, tested & successful former FM, P.Chidambaram has said this budget is an ‘account for votes’ not ‘ vote on account’,” he tweeted.

Sir, we have offered nothing for the younger generation in this #Budget as more than 60% of our population is below 35 yrs of age. Do we have a magic wand which will generate create more jobs for them? Sir, some food for your thoughts on this important & serious issue. Jai Hind!

BJP lawmaker Shatrughan Sinha was a minister in the previous NDA government. However, after having won the 2014 general elections, he grew apart from the present BJP leadership. Over the years, he has been attacking the party and its leadership, including Prime Minister Narendra Modi. He had also attended the rally organised by Trinamool chief Mamata Banerjee in Kolkata and made a piercing attack on PM Modi.

In view of the Lok Sabha elections due in April-May, parties, across the spectrum, are making promises to the masses. Congress president Rahul Gandhi had promised a guaranteed minimum income to the poor people of the country.

The interim budget tabled by Finance Minister Piyush Goyal on Friday in parliament, was also full of sops for the masses. Apart from farmers, the budget also enhanced income tax exemption limit to Rs 5 lakh, which is seen as the move to woo middle class in an election year.

Barely a couple of days after the government’s announcement for farmers, Mr Gandhi announced today that loan waiver will be granted to all the farmers across the country if his party comes to power at the centre.