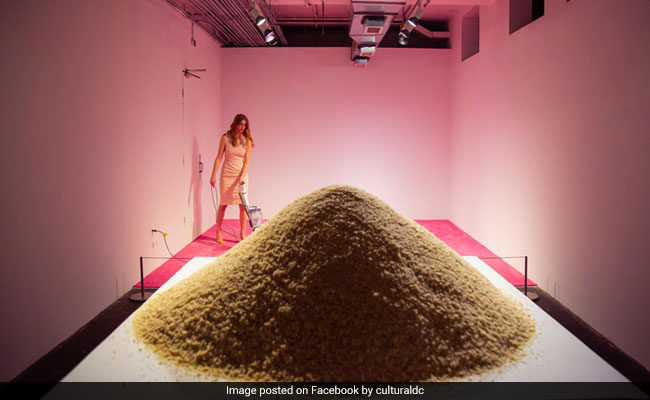 “Women can choose to knock each other down or build each other up. I choose the latter,” Trump tweeted, her first message since wishing everyone a Happy New Year (in English and Chinese) to mark the Feb. 5 Chinese lunar new year holiday, celebrated by more than a billion people around the world.

It was an uncharacteristically prickly remark from Trump, whose Twitter account mostly keeps things upbeat, promoting the causes she champions, including women’s empowerment, in her role as senior adviser to President Donald Trump. Trump’s rebuke of an exhibition sponsored by CulturalDC, which promotes the arts and creates spaces for artists in Washington’s booming real estate market, was also strangely disproportionate to the artist’s provocation. Rubell’s work certainly invites criticism, but only as part of a larger and more ambivalent contemplation of Trump’s role as a fraught female figure in American society.

But more than anything else, Trump’s tweet suggests something that has been muttered and speculated about since her father won the presidency: What is her agenda? What does she want from this strange, chaotic, destructive episode in American political life?

There is a curious moment in director Michael Moore’s documentary “Fahrenheit 11/9,” an anti-Trump jeremiad premised on the idea that the Trumps never really had any interest in the presidency. Moore contends that figures such as Ivanka and her husband, Jared Kushner, were in fact just following along as one of Donald Trump’s improvisatory public relations stunts morphed into a genuine candidacy. One bit of evidence is a brief interview with Kushner, during which he praises the skills of the gleefully unabashed progressive filmmaker, an opinion that would have been unremarkable in the social circles Kushner and Trump inhabited when the elder Trump was still an absurd entertainment figure.

If Moore’s view of the younger Trumps is correct, it’s reasonable to assume they may be particularly sensitive to how they are perceived within the social world to which they hope to return, a social world in which the arts play a much larger role than they do among Washington political elites. The usual trajectory for the offspring of presidents is lifetime membership in a quasi-official American aristocracy, with greater access to wealth if they need it, and greater luster to their wealth if they already have it. But there is nothing usual about the Trump presidency, and it is entirely possible that the younger Trumps, tainted by the nationalist rhetoric and racial division of the administration they serve, will be pariahs within the world they left only two years ago.

Something in Rubell’s work certainly got under the skin of Ivanka, who otherwise presents as unflappable. Her tweet suggests she’ll take the high road, choosing to build women up. But the fact that she sent it shows she’s worried she isn’t exactly succeeding in her longer-term efforts to be seen as a “take the high road” voice within her father’s orbit. With her tweet, she followed her father’s own peculiar but persistent precedent: Emphasizing the very thing she might otherwise have allowed to pass into oblivion.

Rubell’s work invites multiple interpretations, including ones that suggest the idea of a “taint” or stain or ineradicable blight, and others that speak directly to ideas of wealth and the cultural laundering of wealth. The performance piece, which can be streamed online when it is live at Flashpoint Gallery, involves a poised, ram-rod-straight young blond woman with a vacuum. As visitors throw crumbs onto a carpet, the stand-in Ivanka Hoovers them up, with a rictus of a smile on her face. In a literal but comic sense, she is doing the “clean up” work that she struggles to do within the administration, which always seems to soil things – even its own efforts to dismantle political and social contracts. Is Donald Trump racist? No matter, Ivanka will clean up the mess, even as her father tweets out more dog-whistle racism. But the din of the vacuum will never mask the larger noise coming from the administration.

There is something Sisyphean in the two-hour performance. The crumbs just keep coming, and the cleaning up is never done. Crumbs recall the economics of wealth and poverty, the idea of trickle-down economics, and the old saying commonly but falsely attributed to Marie Antoinette: Let them eat cake (or brioche). Perhaps the crumbs are us, the 99 percent, the “losers” in the great economic shakedown of late capitalism that left the 1 percent with half the world’s wealth and gave us the spectacle of the secretary of commerce, Wilbur Ross, suggesting that furloughed federal workers could survive the government shutdown simply by taking out loans from their local bank. Ivanka’s vacuum fattens and swells on the little people, and not one crumb will be left behind.

It’s also possible that Ivanka Trump’s ire was prompted by the elegance of her double. Ivanka is all about branding, about owning her identity and architecting her best life. Replicas are uncanny and make people strangely uncomfortable, and even though this work is performed by a live stand-in, it has something in common with the effigy art made by figures such as Maurizio Cattelan, an Italian artist who created a life-size, realistically clad sculpture of Pope John Paul II crushed by a meteorite. The double is an old trope of art that becomes particularly volatile when the figure rendered elicits strong cultural, political or religious feelings, and may be even more unstable when the figure, like Ivanka Trump, is one who has built her life on the careful cultivation, marketing and monetizing of her identity.

Memory also is at stake here, and that’s the most likely explanation for the strange Twitter hiccup in Ivanka’s efforts to stay above the fray. There are multiple forms of memory at work at all times in a complex society, and the arts as memory is one of the most complicated. Legitimate journalists and historians are bound by the facts and the public record. Artists have no such strictures, though tendentious artists who make work without a higher truth may find their work unmasked and marginalized. Artists such as Rubell participate in the creation of a memory of Ivanka Trump that can’t be befogged by repeated and clamorous claims of “fake news” because they make no claim to be reporting the news.

What matters with a work like “Ivanka Vacuuming” is whether it resonates, whether it gets people looking and talking – even questioning their own participation in creating the public image of Ivanka. There may be, even now, people buzzing about it at dinner parties on Manhattan’s Upper East Side, and that chatter is a form of invisible work – cutting and etching and effacing all the possible Ivankas in ways that are both invisible and indelible.

We won’t know what emerges from “Ivanka Vacuuming,” but we can be certain of one thing: Its power to shape the Trump family’s reputation exploded just after 10 a.m. Tuesday.