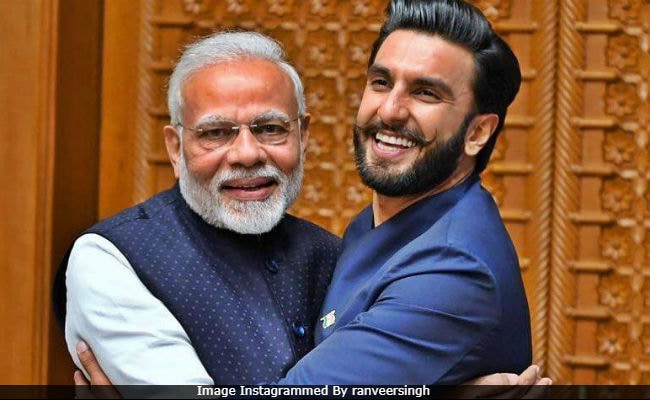 Ranveer Singh appears to have picked out his favourite picture from today’s meeting with Prime Minister Narendra Modi. A delegation of Bollywood celebs met PM Modi in New Delhi on Thursday to discuss about the entertainment industry and Ranveer was among the several stars to have attended the meeting. On social media, the 33-year-old actor posted a picture of himself hugging PM Modi and captioned it as, “jaadoo ki jhappi. Joy to meet the Honourable Prime Minister of our great nation.” The post got over 6.5 lakh likes in just a few minutes (and very much counting). Take a look at Ranveer Singh’s photo with PM Modi.

Sidharth Malhotra, who also represented the film fraternity at the meeting, shared two pictures. One of them features him with PM Modi while the other is of the delegation. “Thank you, Narendra Modi sir for hearing us out. It was an honour and we are grateful for your support towards the film industry.”

After the meeting Karan Johar shared an epic selfie of the team with PM Modi. In the same post, he also shared the details of their meeting and the discussions they had.

“As a community, there is a huge interest to contribute to nation building. There is so much that we want to do. And can do and this dialogue was towards how and what ways we can do that. When the youngest country (in demography) joins hands with the largest movie industry in the world, we hope to be a force to reckon with. Together we would love to inspire and ignite positive changes to a transformative India,” he wrote. Karan Johar also thanked PM Modi on behalf of the film industry for reducing GST rates on film tickets.

Last month, PM Modi had met some film producers and actors to discuss the issues faced by the film industry.