​Is it obvious to compare Jose Mourinho’s 54th minute substitution of Jan Vertonghen against Southampton to George taking Lenny ‘out back’ in Of Mice and Men? Yes. Yes it is. But that’s why it works.

As the Belgian left the pitch behind Hugo Lloris’ goal – a good 60-second trudge away from the Spurs bench – he was warmly applauded by supporters as he passed them by, unaware of just how deeply affected the centre-back was by his performance and subsequent subbing.

Vertonghen cut a desolate figure when he finally made his way round to his seat, deep in thought and almost inconsolable, aware that this could be the end at a club where he’s put his heart and soul into giving supporters the times of their lives. On a day where ​Christian Eriksen talked about his disappointment of not winning trophies at Spurs, Vertonghen strikes as someone more focused on the intangibles of fandom.

A flick through his Twitter feed tells you he’s not up for the PR-pedalled nonsense where footballers don’t even sound human anymore. It’s a small thing in the modern era that some form of normal-ness remains – everyone remembers the out of context ‘little update, we are s***‘ comment as the most famous example.

But Wednesday was the new normal for Vertonghen, who spent the first half getting dizzied and dazed by Southampton’s perpetual pressing and vertical passing. It took no more than five minutes to expose his lack of pace, his lack of power, to sense his panic already setting in. 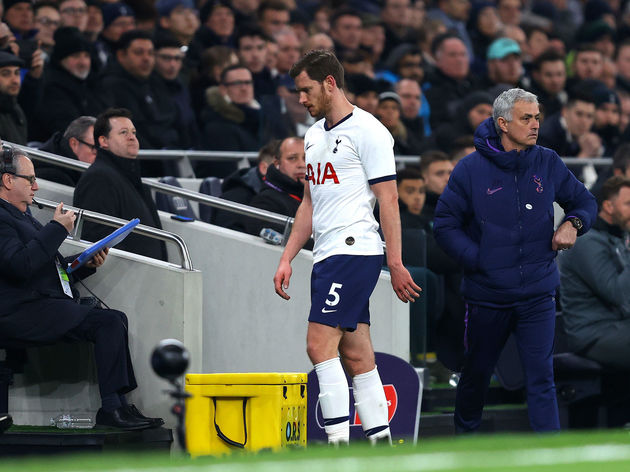 Mourinho compared the decision to hook Vertonghen to when he brought off Eric Dier (similarly awful on Wednesday) during his second game in charge, when Spurs fell two goals down at home to Olympiacos after half an hour. Tactical reasons was the official line, but it was notable that Japhet Tanganga wasn’t having a great game either and Mourinho picked the Belgian come off – trusting in youth over experience despite his coaching history, and perhaps a sign of just how bad Vertonghen was.

When Mauricio Pochettino harked on about the club needing a ‘painful rebuild’ over the last couple of years, Vertonghen was almost certainly one of those he had in mind of clearing out. Heading into the season aged 32, there were clear signs of waning even last campaign – only a year removed from a wonderful campaign where he won the club’s Player of the Year award.

​Danny Rose was shipped off to ​Newcastle late in the January transfer window and, while his presence in the dressing room seemed to be increasingly disruptive, his influence on the pitch was equally as troubling as Vertonghen’s – they were/are the targets, the weaknesses on every prematch dossier and scouting report of Spurs’ opposition, though there’s plenty to aim for right now. To make these conclusions from the ​Southampton game isn’t a case of recency bias or confirmation bias because Spurs have been rubbish for most of the season, but each passing week adds another nail in this squad’s coffin – Rose was the first casualty, and it seems Vertonghen is next.

The ‘painful’ part of the rebuild is an open wound that hasn’t been treated for far too long, and the anticipated problem of players overstaying their welcome won’t help Mourinho in his quest to find the quickest way to make ​Tottenham his own side.

Tanguy Ndombele ‘Determined’ to Stay at Tottenham Despite Barcelona Interest