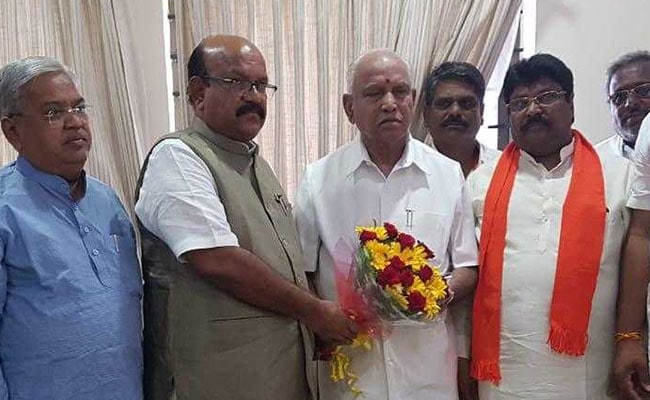 A Karnataka lawmaker joined the BJP today, two days after he resigned from the Congress. Umesh Jadhav joined the BJP in Kalaburagi district before Prime Minister Narendra Modi’s address at the rally there.

Karnataka BJP chief BS Yeddyurappa welcomed him into the party. “I am happy and proud joining BJP,” Mr Jadhav said before PM Modi arrived on the stage.

Umesh Jadhav is likely to be the BJP’s candidate for the Kalaburagi seat in the upcoming national election, news agency PTI quoted sources as saying. If the turncoat politician is fielded from Kalaburagi, he will take on Congress veteran Mallikarjun Kharge, a nine-time legislator and two-term Lok Sabha member who has never tasted electoral defeat.

The Congress had called Umesh Jadhav a “betrayer” and said that he had “already sold himself to the BJP”. He and three other Congress legislators – Ramesh Jarkiholi, B Nagendra and Mahesh Kumtahalli – surfaced in Bengaluru last month, weeks after they went “missing”. The Congress had recommended their disqualification to the assembly speaker.

The Karnataka assembly speaker is yet to accept Mr Jadhav’s resignation.

The four leaders had kept the party on tenterhooks for several weeks, skipping the budget session of Karnataka assembly last month and defying the party’s instructions to attend the two meetings of its legislators on January 18 and February 8.

The opposition BJP has been accused of trying to poach the legislators to bring down the coalition government of Chief Minister HD Kumaraswamy’s Janata Dal (Secular) and the Congress.