Manchester City midfielder Kevin De Bruyne ​says he is relishing this ‘remarkable’ Premier League season in which he sees three teams competing for the crown of the best team in English football.

The Belgium international made his first start since Boxing Day in the 3-0 win over lowly Huddersfield as City continue to breathe down the neck of Jurgen Klopp’s defiant Reds – reducing Liverpool’s lead to four points. “There’s two teams and even Tottenham, who have so many points at this stage of the season,” De Bruyne told Sky Sports, as he continues to work his way back to full fitness after successive knee injuries.

“It’s quite remarkable because in a lot of seasons you would already be 10 or 12 points ahead, but this season it’s tight and I like it.

“I like it to be competitive. In the end that’s what it’s all about.”

After a few poor performances and results for Pep Guardiola at the turn of the year, the Citizens have started 2019 brightly – notching their fourth straight league win courtesy of Danilo’s deflected first-half effort and quick fire goals early in the second period from Raheem Sterling and Leroy Sane.

Speaking about the 3-0 win over the ​Terriers, De Bruyne said: “Every game is important these days.

“It was good to come here, it was going to be tough because they changed manager and you know they’re going to be up for it. 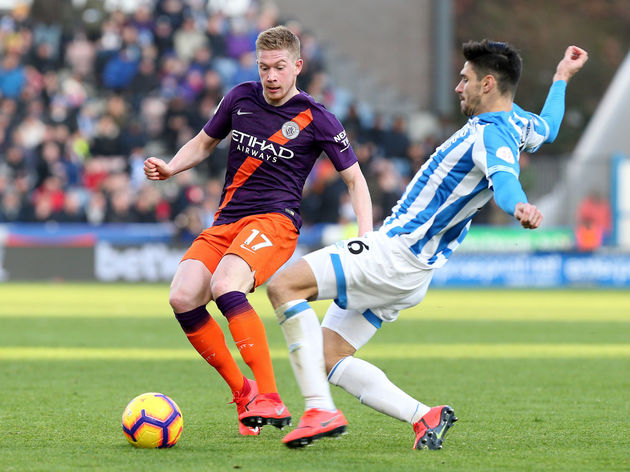 “But in the end it was a good job. We scored three goals and no goals against, so we did what we had to do.”

De Bruyne was instrumental in ​Manchester City’s record breaking season in the last campaign but has been restricted to just eight league appearances this term as the Blues sit behind Liverpool at the summit.

“I’m getting better obviously,” De Bruyne added. “You need the run of games where you play a lot because I’m not used to playing every three days. But I’m getting there. I’m happy with the way I’m performing. It’s not the same like it was last year, but that’s what you can expect.”

7 ways to break the silence after a fight