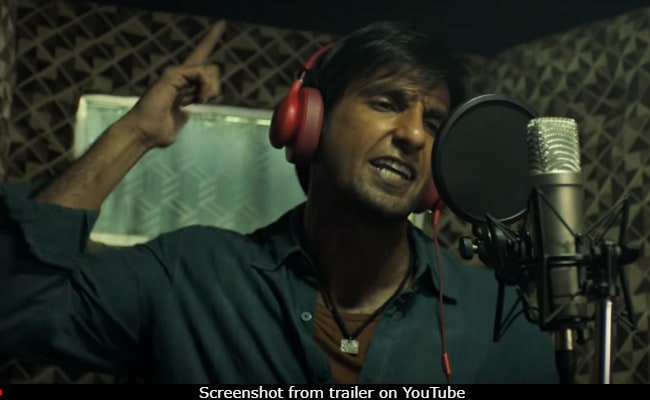 Ranveer Singh raps his way to your heart in the trailer of Gully Boy, which released on Wednesday. Ranveer has slipped into the skin of the underdog rapper with so much perfection that Twitter just can’t stop talking about how fabulous the trailer is. On Twitter, shout outs have also been delivered by Ranveer Singh and Alia Bhatt’s colleagues such as Karan Johar, Dia Mirza, Janhvi Kapoor, Vicky Kaushal and others. “What a trailer! What a vibe! W(raps) you into its world and you watch it with RAPt attention! Congratulations to EXCEL, Ritesh, Farhan, Ranveer, Alia and Zoya! For this new energy film! This is a winner,” tweeted Kara Johar.

What a trailer!!!! What a vibe!!!! W(Raps) you into its world and you watch it with RAPt attention! Congratulations to EXCEL, Ritesh, Farhan, Ranveer, Alia and ZOYA!!! For this new energy film!!! This is a WINNER!!! https://t.co/ZqEGM7K4Q1

Stop everything and watch this #ApnaTimeAayega#GullyBoyTrailerhttps://t.co/W3av06hYM8#ZoyaAkhtar@aliaa08@RanveerOfficial@FarOutAkhtar@ritesh_sid@excelmovies#TigerBaby

Loveeee the #GullyBoyTrailer!! Way to go #ZoyaAkhtar, @RanveerOfficial, @aliaa08 Can’t wait to see more! All the best to the whole team @ritesh_sid@FarOutAkhtar@excelmovieshttps://t.co/ieYlOBtYAW

OMFG!!! What have you guys done?!!!!!! The vibe, the fire, an energy like never before!! @RanveerOfficial you are not just an actor, you are a force!! And @aliaa08 u are all kinds of awesome!! Cannot wait!!! @excelmovies#ZoyaAkhtar#GullyBoy#GullyBoyTrailerhttps://t.co/87P64mfqfK

WOW WOW… Definitely looks like the best thing one has seen in Bollywood in the recent years :). Congratulations #ZoyaAkhtar for promises of another stunning film. @RanveerOfficial is electrifying and @aliaa08 like always a delight to watch. Love the attitude of the film. https://t.co/AVxdrgAxwx

Meanwhile, Twitter is all praises for both Ranveer and Alia – he plays an aspiring rapper, who hails from the slums of Mumbai and is struggling to make a mark in the world of Indian rap; Alia has been cast as his love interest, who appears to be a feisty young woman. “Gully Boy trailer has the unique kind of energy. The trailer is powerful, emotions are deeply layered and the rap are well placed. Ranveer and Alia add to Zoya Akhtar’s magical yet real world. Can’t wait,” read a tweet, which basically summed up the general sentiment on the Internet about the trailer.

The damn subtlety!!!!!
The same guy who portrayed Khilji and Simmba?????

I don’t understand how the hell does @RanveerOfficial portrays so many different characters in his movies so accurately in such a short time. Genius. Just genius. The trailer is the accurate representation of the life of every artist in this country. #GullyBoyTrailer#gullyboy

#GullyBoyTrailer has the unique kind of energy. The trailer is powerful, emotions are deeply layered and the rap are well placed. @RanveerOfficial@aliaa08 adds to #ZoyaAkhtar ‘s magical yet real world. Can’t wait!!

Ranveer and Zoya especially have perhaps their career best with Gully Boy. Ranveer’s transformation is unbelievable – and I’m not about the physical aspect. His demeanour, sullen look and raging nerves are spectacularly portrayed in the #GullyBoyTrailer.

If there is one thing you do today, watch this – https://t.co/UQIBAr0eof#GullyBoy#GullyBoyTrailer#RanveerSingh@RanveerOfficial#apnatimeaayega

#GullyBoyTrailer left me SPEECHLESS. The film looks so hard hitting. And @RanveerOfficial, my boy I can’t believe he’s the same guy who played the villainous Khilji and then the notorious Simmba and now is #GullyBoy! I’m in awe of this incredible talent.

Watch the trailer of Gully Boy here. Be prepared to be blown away:

Directed by Zoya Akhtar, Gully Boy is all set to hit screens on February 14.