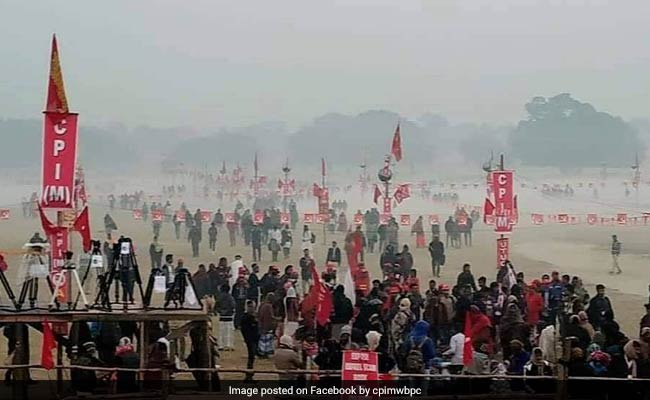 Nearly two weeks after West Bengal Chief Minister Mamata Banerjee organised a massive opposition unity rally in Kolkata, the Left Front organised a “people’s brigade” meeting today at the same venue in the city, marking the launch of the Left’s campaign for the Lok Sabha elections due by May.

Former Jawaharlal Nehru University Students’ Union leader Kanhaiya Kumar, who is facing a sedition charge, was scheduled to address the rally but cancelled his plans as he is unwell.

Sources said lakhs of Left Front supporters from across West Bengal are coming to attend the event.

On social media which the Left has used extensively to promote the rally, there is a huge demand for former chief minister Buddhadeb Bhattacharjee to address the event. He is not in the best of health, but will attend the event, CPM sources said. Earlier, a message from him was scheduled to be read out if he was unable to attend.

The Left is trying to claw back to power and influence in the state as well as the centre, though it is still in power in Kerala. The ruling CPI(M)-led Left Democratic Front (LDF) in Kerala in December last year bagged 21 of 39 seats in bypolls to the local bodies.

Former Tripura chief minister Manik Sarkar of the Left was voted out of power in state elections last year, ending the Left’s 25-year rule of the northeast state.

Kanhaiya Kumar and other former student leaders have been accused of organising an event on the college campus against the hanging of Parliament-attack mastermind Afzal Guru in February 2016.