Manchester United eased to a comfortable 1-0 win over Leicester City in the Premier League on Sunday afternoon, as Marcus Rashford’s early goal earned his side the three points.

United took the lead after just eight minutes, as Paul Pogba capitalised on a defensive error from the hosts, dinking a delightful ball through to Rashford who finished with trademark precision. Ole Gunnar Solskjær’s team looked completely in control, and cruised their way to a comfortable half-time lead.

​Leicester looked a far better side in the second half, and drew some fine stops from rejuvenated ​United stopper David de Gea. Despite a late rally, the hosts were unable to find the equaliser, and the Red Devils sealed another important three points in the race for Champions League qualification.

The Foxes have picked up just 14 points at home this season – the joint fourth lowest tally accumulated in the ​Premier League during the 2018/19 campaign thus far. Once again, despite a hearty atmosphere radiating from the King Power Stadium, the players weren’t able to replicate their fans’ enthusiasm, with another downbeat showing on their own turf. As the east Midlands side admirably demonstrated during their unprecedented 2015/16 Premier League-winning season, home form is everything when it comes to building a successful campaign, and the tendency of Claude Puel’s side to struggle at their own HQ is becoming a real issue.

With four very winnable home matches on the horizon, the Foxes need to draw from their fans’ enthusiasm and make the King Power a fortress once again. 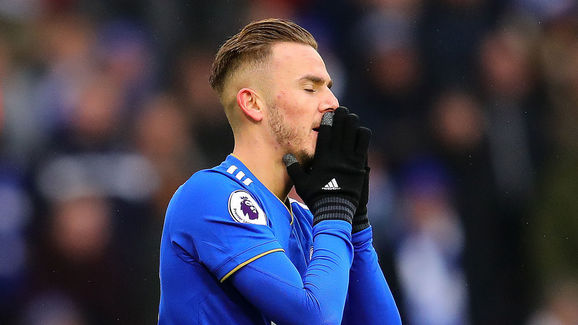 Desperately unlucky not to score or pick up an assist, James Maddison worked his socks off against United. As always, his technical skills were a delight, and his corners caused the visitors no end of problems at the back.

Boos echoed around the King Power Stadium when the 22-year-old was substituted just 60 minutes into the match – highlighting how highly the Foxes faithful rate their summer signing.

Have to say I’d love to see Maddison at Liverpool someday. Heard he’s a fan and has huge potential imo.

Shocker by Puel there. You cannot take Maddison off when you need a goal.

The time is coming for Leicester City to find a new centre-forward. The 32-year-old has been erratic at times this season, and seems to have lost his fox-in-the-box finishing ability. He was lucky not to be sent off for a wild first half challenge, and didn’t give his side anywhere near the attacking threat they needed to make things uncomfortable for the visitors.

The Ole Gunnar Solskjær bandwagon continues to tear along after Tuesday’s minor blip against Burnley, with the Red Devils once again showing their credentials as top four finishers. From the first whistle, United looked in command, and found themselves acres of space in the midfield to dominate the game.

United have the easiest of the run-ins in comparison to Spurs, Chelsea and Arsenal, and a Champions League qualification spot finish – something unthinkable during the latter stages of José Mourinho’s tenure – is looking more possible with every passing game. It’ll go down to the wire, make no mistake, but Solskjær’s side are surely favourites to pip their rivals to the post. What a transformation Luke Shaw has shown under his new manager. Passed off as an out of shape ne’er-do-well under his former boss, the England international has come back fighting with a point to prove since the new year, putting in a string of highly accomplished defensive displays. It was an excellent afternoon from Shaw, whose efforts earned his side a clean sheet.

In better news, Utd grind out a win and keep a clean sheet. Luke Shaw was outstanding

Luke Shaw with yet another class performance but he won’t get the credit he deserves.

Gutsy win for #mufc. First clean sheet for Bailly and Lindelof as a partnership. Luke Shaw was excellent. A day for the defence to take the acclaim.

Arguably the weak link in United’s midfield, Nemanja Matić’s performance was particularly uninspiring against the Foxes. The former Chelsea man continually misplaced passes and made reckless challenges, but had his blushes spared by his teammates in a strong overall performance from the Red Devils.

The Foxes will look to bounce back from their dispiriting defeat next weekend, when they take on Tottenham Hotspur at Wembley Stadium. It should be a tough afternoon for Puel’s side, with Spurs having won their last three Premier League outings on the trot.

United travel to Fulham next Saturday, where they’ll look to continue their unbeaten run under Solskjær. The Cottagers’ shaky defence has been a real issue this season, and the Red Devils will be confident of netting a few goals against the relegation-threatened side.

Raheem Sterling Reveals Desire to Play in America at Some Point...