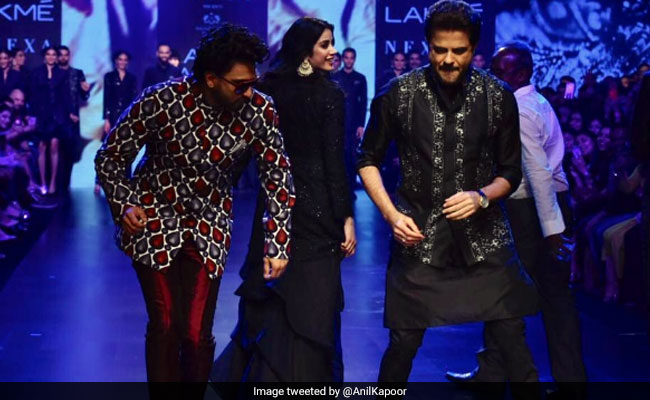 The show was an absolute treat not just for the 62-year-old actor, who got a chance to share the ramp with his niece but also for the viewers present there as Ranveer Singh, who was seated in the front row cheering, joined the showstoppers on the ramp. When Ranveer takes the stage you can expect some really fun things to unfold and that’s exactly what happened. As Anil Kapoor and Janhvi were about to leave the stage after their final walk with the designer, the former spotted Ranveer in the front row and pulled him up on stage. What happened next was a little jig by Anil Kapoor and Ranveer.

Take a look at the video here:

An overwhelmed Anil Kapoor shared glimpse from last night’s event on social media. “More walking for Raghavendra Rathore was a two-fold pleasure for me! I got to walk with my beautiful niece Janhvi Kapoor and shake a leg with my Tiger Ranveer Singh! Thank you for the honor and opportunity,” he captioned the pictures.

Walking for #RaghavendraRathore was a two-fold pleasure for me! I got to walk with my beautiful niece #JanhviKapoor & shake a leg with my Tiger @RanveerOfficial ! Thank you for the honor & opportunity! @LakmeFashionWkpic.twitter.com/WJkR7Tuqu8

Anil Kapoor and Ranveer Singh have co-starred in the 2015 film Dil Dhadakne Do and the duo shares a great bond. Ranveer is frequently seen expressing his admiration for the actor. Remember the epic Simmba met Lakhan picture? Ranveer Singh and Anil Kapoor will be seen sharing screen space in Karan Johar’s Takht.

Meanwhile, Janhvi Kapoor, who walked the ramp with chachu Anil Kapoor perhaps for the first time said in an interview to IANS: “It was a special experience as I was walking with chachu.”