LG hasn’t updated its budget smartphone lineup for quite some time now. The K-series was introduced about 3 years ago and focussed mainly on the budget end of the market. These smartphones got a refresh in 2017 and some of them made their way to India. The LG K-series models had to face stiff competition from multiple manufacturers in the budget segment. LG did not move a lot of units nor did it manage to make a significant impact in the price segment. As a result, multiple LG K-series smartphones were launched across the world but very few made it to India.

While LG is known for its G and V-series of smartphones, the company is still keeping the K-series going. And by the looks of it, the upcoming LG K12+ is going to be the first device from the K-series in 2019. Folks over at XDA Developers spotted the K12+ while searching in the Google Play Console Device Catalogue and came across a new smartphone with the model number mmh4. 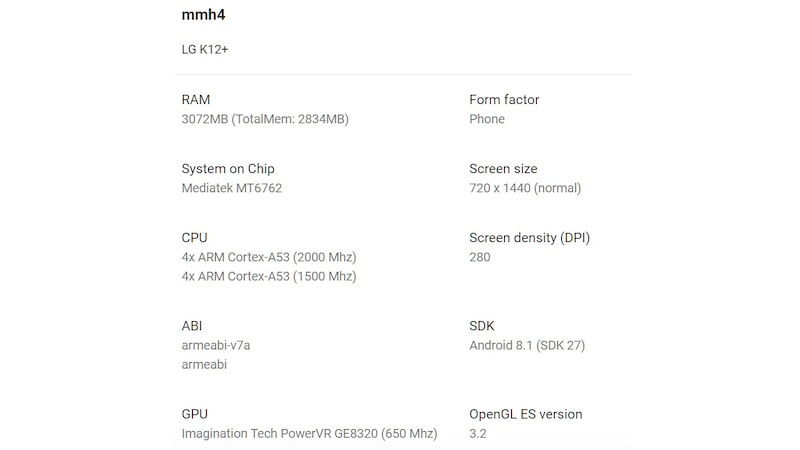 The catalogue reveals that the smartphone will have an HD+ (720×1440 pixels) display with an 18:9 aspect ratio and a DPI of 280. It seems to be powered by a MediaTek MT6762 chipset and has 3GB of RAM. MediaTek MT6762 is an octa-core processor with four Cortex-A53 cores clocked at 2GHz and the other four Cortex-A53 cores clocked at 1.5GHz. It has a PowerVR GE8320 GPU that is clocked at 650MHz. The smartphone will ship with Android 8.1 Oreo, which is disappointing given that Android 9 Pie has been available for a while.

There is no word on when LG plans to introduce the K12+ or what will be the pricing of the phone. It is quite possible that we end up seeing the smartphone at the Mobile World Congress later this month.

Workers Criticise Amazon on Climate Despite Risk to Jobs