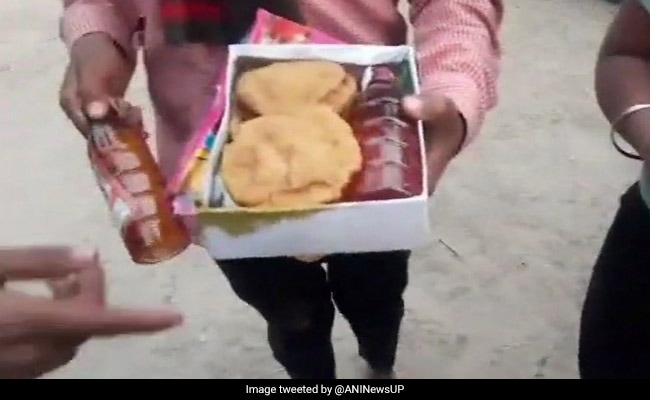 People attending an event hosted by Uttar Pradesh BJP lawmaker Nitin Agarwal on Monday eagerly opened food packets distributed to them and couldn’t believe their eyes. There was a bottle of liquor stashed along with puri and subzi. The event was organised at the Shravana Devi temple in Hardoi. Naresh Agarwal, the lawmaker’s father, who recently crossed over from the Samajwadi Party to the BJP, was present.

Calling it an “unfortunate incident”, the BJP parliamentarian from Hardoi, Anshul Verma has written to Chief Minister Yogi Adityanath, complaining about the incident. Mr Verma told news agency ANI that he will inform the “top leadership” about the distribution of liquor bottles at Nitin Agarwal’s event. “To rectify its mistake, the BJP will have to rethink,” said Mr Verma.

“Naresh Agarwal, who has recently joined the BJP had organised a Pasi sammelan (gathering) at one of our religious places. I will call it an unfortunate incident because it (liquor bottles) was given to small children whom we had given pens and copies earlier. I will inform the top leadership and write to the excise department about how such large-scale distribution of liquor went unnoticed,” Mr Verma said.

A video shot by someone who attended the event shows Nitin Agarwal announcing from the stage that food was being distributed. Mr Agarwal directed the village pradhans or headmen to collect the boxes for their respective villages and distribute them.

“All the pradhans must go to the place where food is being served… they  must take the packets and distribute it among the villagers,” Mr Agarwal was heard saying on the microphone.

Some of the packets were even given to boys. One of the boys opened the box and showed how liquor in a plastic bottle was kept on one side along with puri, subzi and mithai.

Naresh Agarwal and his son have not yet commented on liquor bottles distributed at the temple event.