Liverpool supporters have praised defender Virgil Van Dijk as footage emerged showing the Dutchman trying to rally his side in the closing stages of Saturday’s 1-0 victory at Brighton.

A second-half penalty from Mohamed Salah secured all three points for the Reds who are now seven points clear of second-placed Manchester City and nine ahead of Tottenham.

The win against the Seagulls continues ​Liverpool’s remarkable record of not dropping a single point against teams outside of the top six. 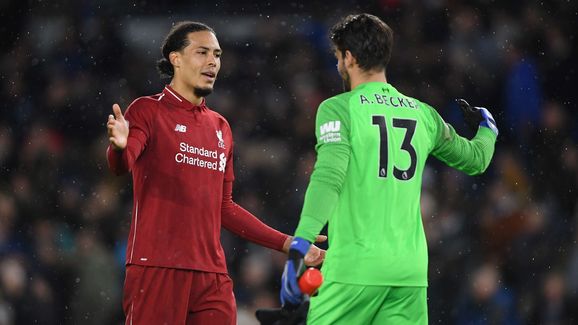 Following the arrival of Van Dijk from ​Southampton for £75m last January, the Reds have improved considerably in defence with the 27-year-old bringing a level of composure and confidence that had previously been missing at Anfield.

The former Celtic and Groningen star has played a pivotal role this season alongside the likes of ​Trent Alexander-Arnold, Andrew Robertson and goalkeeper Alisson Becker with the club keeping fifteen clean sheets in all competitions.

Reacting to Van Dijk’s urgency to ensure that Liverpool would maintain their concentration in the dying stages at the Amex, fans took to Twitter to hail their defensive leader.

Here are some of the views expressed by the supporters:

Let’s be honest, Van Dijk is the real captain and leader on the pitch

Honestly, I love Virgil van Dijk. Out and out leader but also ridiculously good at defending. Crucial for Liverpool he stays fit.

There was a moment today where the ball fell back to van Dijk late in the game and he just stood there in possession for a second and just told everyone where he wanted them to be. Proper leader. Proper footballer.

​Bayern Munich defender Mats Hummels gave his opinion on whether the Dutchman was currently the world’s best defender on ​Twitter whilst hosting a Q&A with his followers, replying with: “Yes.”

If Liverpool are to win their first top flight title for twenty-nine years they will have to keep Van Dijk fit, especially with the likes of Joe Gomez and Dejan Lovren both currently sidelined with injury.

The Reds face ​Crystal Palace at Anfield next Saturday in the Premier League and will be hoping to win their tenth home game of the season.

Don Garber is a Disgrace and MLS Fans Deserve Better |...

Sergio Ramos: 9 Facts About the Real Madrid Stalwart After 14...